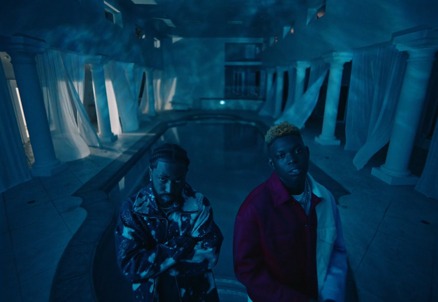 Bleu was named the No. 1 most streamed R&B artist on Audiomack this week, and recently secured his first career No. 1 album placement on the Billboard Independent Albums chart with Moon Boy. The album also debuted at No. 12 on the Billboard 200 and No. 15 on the Rolling Stone 200, respectively, as well as several significant Top-5 placements across key Billboard charts, including R&B Albums (No. 2), R&B / Hip-Hop Albums (No. 3) and Digital Albums (No. 5) and solidified Bleu’s rapid ascension over the past year.

The album’s lead single, “Baddest (feat. Chris Brown and 2 Chainz),” continues to skyrocket, hitting the Billboard Hot 100 this week at No. 87 and racking up over 22.9 million views on YouTube over the past month.

Bleu’s debut offering also included an unprecedented array of star-studded collaborations with John Legend, H.E.R, Kehlani, Big Sean, Davido, Chris Brown, 2 Chainz, Moneybagg Yo, among many others.  In support of the album, he recently announced his upcoming North American “Moon Boy Tour,” a 38-date cross-country tour that will kick off on August 26 in Minneapolis with stops in major cities including Chicago, New York, Atlanta, Houston, Los Angeles, and more. Tickets are available now HERE.

The Alabama native’s profile skyrocketed after the release of his breakout song “You’re Mines Still (feat. Drake),” which recently earned RIAA platinum certification after reaching No. 1 at urban radio and peaking at No. 18 on the Billboard Hot 100.  Altogether, Bleu’s music has racked up over 1 billion streams across all platforms.