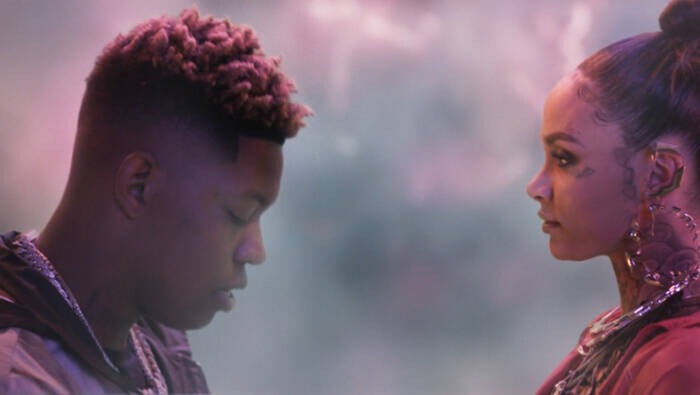 Directed by Jon Primo and set in a deserted military camp, Bleu ventures off into an unknown portal with his love interest (Posey), is eventually transported to be solo with Kehlani and is eventually reunited with his flame.

Earlier this week, the Alabama native announced plans to unveil his new EP, No I’m Not OK, on Dec. 17 as a holiday gift to celebrate his breakout year. Most recently, Bleu received his first-career, Grammy nomination after he was recognized for his featured appearance on H.E.R.’s album, Back of My Mind, which is up for “Album of the Year.”

Beyond the award-show accolades, the 27-year-old recently made his nationally-televised debut on The Kelly Clarkson Show, where he appeared on the couch for an interview and performed a medley of hits to punctuate a scorching, fourth-quarter in 2021.

Bleu’s defining year is a testament to the comprehensive body of work that he delivered on his debut studio album, Moon Boy, which dropped on July 23, 2021. The independent artist corralled a star-studded array of A-List collaborators, including Drake, John Legend, H.E.R, Kehlani, Big Sean, Chris Brown, Moneybagg Yo and more, to make an unprecedented statement for his first album.