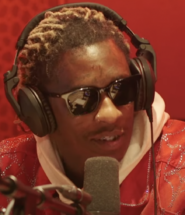 Young Thug is one of the most influential Hip Hop figures of the 2010s. In an interview with Million Dollaz Worth of Game podcast released on Monday (December 28), Thugger explained his reasoning for being a versatile genre-blending artist because strictly staying in the rapper lane restricts how far one can take their artistry.

“I was talking to the youngins the other day, a Hip Hop artist you can only go so far,” he said. “Once you’re Drake level, there’s nothing else you could do. At this point, they’re waiting on you to fall down. It’s no next level unless you go pop or something else. So I’m always focused on the next level.”

Thugger also dished on having so many distractions in his life and with money pouring in from different avenues — Thug said he makes $1 million a show — he admitted it’s tough to lock in and solely focus on music in the studio.

“I’m getting so much money it’s hard to hear,” he quipped. “It’s got to the point I gotta break myself down and sit in the studio for a whole fucking day before I start studying. So much shit can block your writer’s view. It seems like I understood way more when I was poor.”

If Thugger is going to enter the Verzuz world, he wants Lil Wayne to be his battle opponent because of how influential both of their sounds are on the younger generation of rappers.

The 29-year-old is gearing up to unleash his Slime Language 2 at the top of 2021. The original YSL compilation project dropped in 2018.

Catch a few gems from the hour-long candid conversation above.