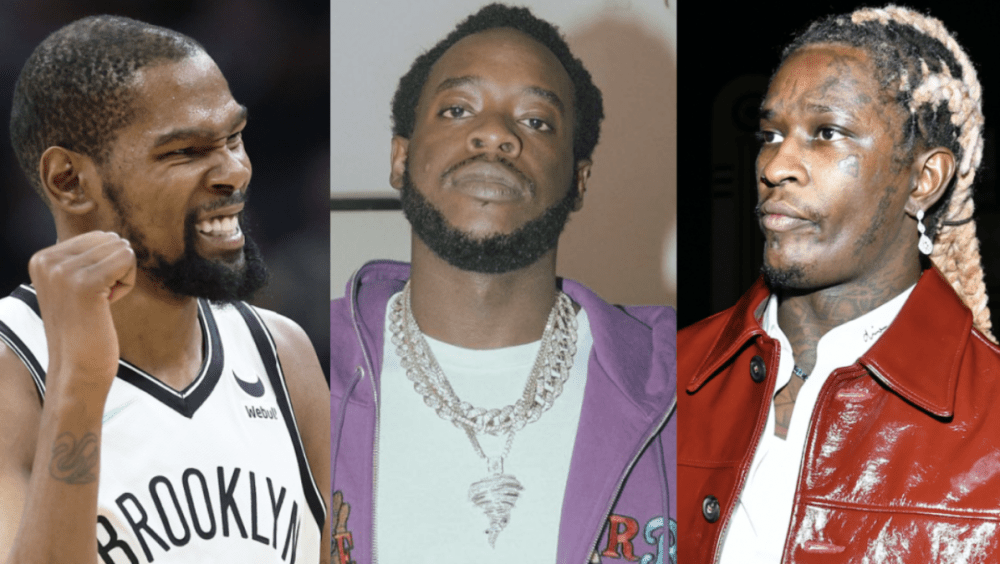 Young Stoner Life signee T-Shyne’s Confetti Nights album is finally ready for arrival. The anticipated years-in-the-making LP from the New York-bred rhymer is set to be released on April 1 — and this isn’t an April Fool’s Day joke.

T-Shyne enlisted a couple of heavy hitters to executive produce the project including a name you might not expect from outside of the Hip Hop realm.

T-Shyne posed alongside KD in October as the two were hard at work putting the finishing touches on the album. Durant is an avid Hip Hop fan and keeps up with what’s trending in the rap world.

The NBA All-Star was recently was trending after asking Doe Boy to pull up on the trenches of Knowles Ave. in his hometown of Cleveland.

It’s not the first time a rapper has solicited KD’s advice, as Kanye West pulled up on Durant in Las Vegas last summer and looked for his tracks that ended up landing on his Donda album.

“He was asking me what songs that I like,” KD revealed in August. “I was like, ‘You asking me like the ones I like you gonna put that on the album.’ He actually did that — the joints that I liked, I heard them at the listening party.”

"He was asking me what songs I liked"

T-Shyne sparred with J. Cole and Young Thug on Punk‘s “Stressed” where he held his own in 2021. Previous singles “30 For 30” and “Feed the Fam” are expected to land on Confetti Nights and look for his next single “Top 5” releasing on Friday (March 18).