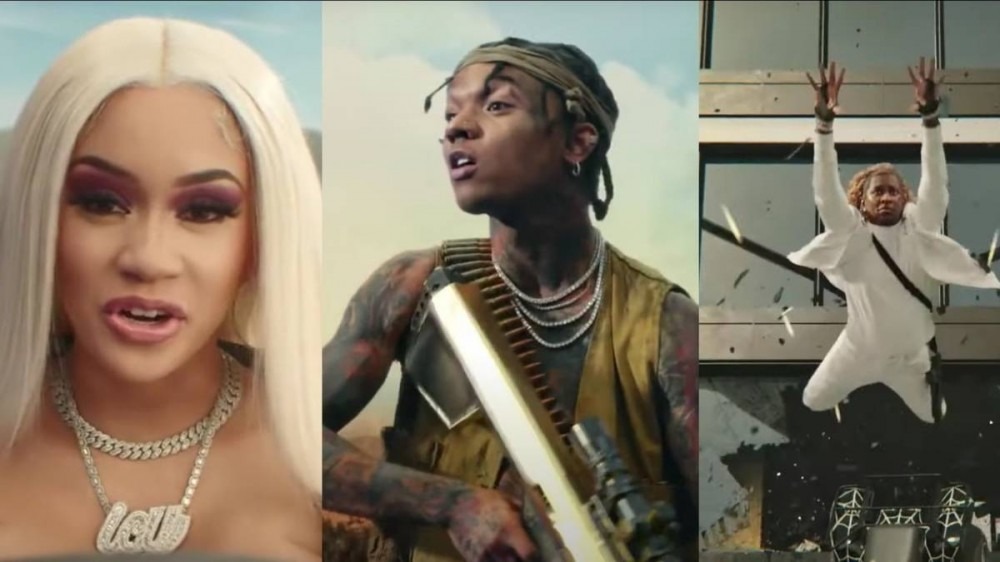 Just as Young Thug brought out rap superstars for his Young Stoner Life compilation album Slime Language 2, he is aligned with some of the biggest rappers this year in the live action-packed trailer for the third season of online multiplayer game Call Of Duty: Warzone.

Within seconds of video starting off, Young Thug is already being rescued by Gunna, who’s flying a helicopter, after smashing through a massive glass skyscraper on an ATV. The two-minute-plus clip keeps paces throughout between fiery explosions and battles and additional appearances from Saweetie, Jack Harlow, Swae Lee and comedian Druski, among others.

In a tweet on Thursday (April 22), Thug shared the clip along with a blatant plug for his SP5DER clothing line.

Gunna and Jack Harlow shared about their experiences shooting the short film for Call Of Duty in a press release, revealing how they got to live out their Warzone fantasies by participating in hands on stunts.

“Shooting the spot was crazy,” Gunna said in the press release. “Had a lot of fun on my custom SP5DER quad, full custom SP5DER outfit, doing stunts like jumping into the chopper and working with Gibson, the boy is serious. I love Warzone. It’s been my favorite game forever.”

Jack Harlow also says his part in the Call Of Duty feature was like a dream come true for himself and a few of his close friends.

“This film was an excellent experience,” Harlow began. “I got a chance to tap into my acting bag a bit, and did some stunts for the first time. Having my good friend Druski starring alongside me made the whole thing even better.”

“I gotta say the best part of all this was sharing the whole experience with my best friend and roommate, Urban Wyatt, who was on set and got to be there for the entirety of the shoot. He is a COD fanatic. It was also a really dope moment for my boys back home to see me in a COD film because they’ve all been playing COD for years,” Harlow continued.

In the past, Call Of Duty has enlisted Hip Hop heavyweights to either help launch or expand on product releases under the expansive franchise umbrella. Back in November 2013, Eminem partnered with the game’s parent company Activision to offer gamers who purchased Call Of Duty: Ghosts a download with an exclusive version of The Marshall Mathers LP 2 with a bonus song for $8.99.

Snoop Dogg also provided his vocals for a special voiceover pack for the game months later in April 2014.

“What interested me most about the project is that my voice could be connected with a game that’s so hip, that’s so hood.” Snoop said in a clip published on Call of Duty’s YouTube channel. “It says a lot. It’s associated with greatness. It’s the coolest game in the hood. All my homies play this game.”

The new Warzone trailer also serves as a significant milestone in the convergence of gaming and Hip Hop culture. Pusha T and Offset have both have invested stakes in ESports gaming clubs, while Logic has managed to leverage his cult following and love for music and gaming into a seven-figure deal as a streamer for popular video game streaming platform Twitch.

Learn more about the gameplay in season three of Call Of Duty: Warzone here.