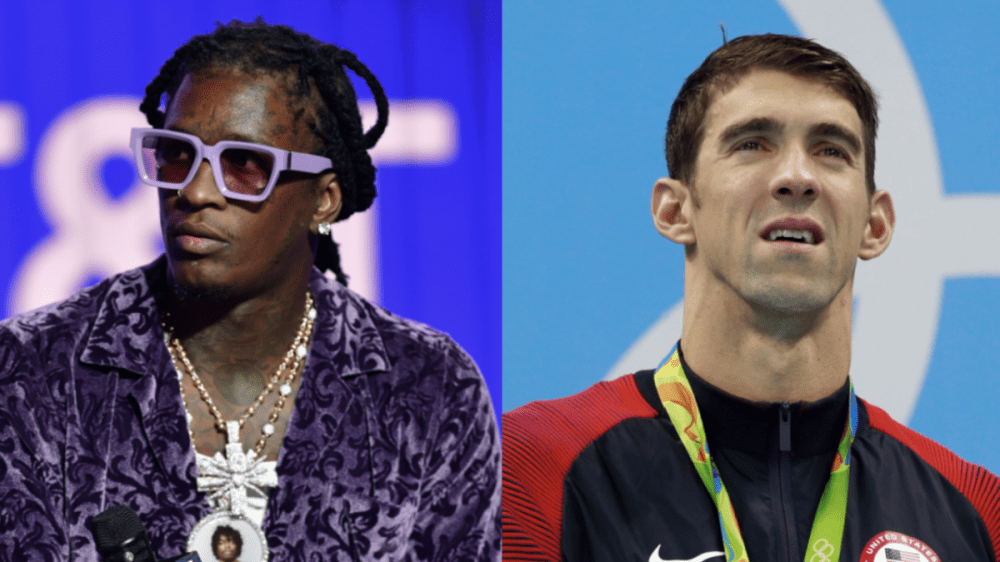 Young Thug currently has a lot of time on his hands while he’s behind bars waiting on his RICO case to go to trial, and that time has allowed to him think about an array of topics.

Following a debate with his cellmate, Thugger took to Twitter on Wednesday (August 31) with a question about 23-time Olympic gold medalist Michael Phelps’ swimming ability.

“I’m talking with my roommate and we’re wondering if you could swim 100 miles from the middle of the ocean back to shore – @MichaelPhelps,” the YSL honcho wrote.

Phelps had to be shocked hearing from Thugger but quickly responded and claimed he could do the 100-mile swim. “Yeah,” Phelps answered. “I think I could make it.”

Looking for an exact time estimate, Thugger hit him back, “How long do you think it would take?”

Fans were hyped at the sight of the unlikely interaction between the swimming legend and Thugger from behind bars. One person joked about Phelps being added to the YSL RICO case while others connected Thug’s line of thinking to him planning to break out of prison.

Oh nah they moved him to Alcatraz

“U Tryna escape,” another person added.

A handful of rappers have name-dropped Michael Phelps in their raps including Thugger, who incorporated the decorated swimmer into “Take Kare.”

“Water like Phelps and you can jump in my league/ Run into my head like a deer when it’s late,” he raps on the 2014 record.

Young Thug remains inside Cobb County Jail in Georgia and was recently denied bond for the third time.

While the “Go Crazy” rapper was back in court virtually from his cell, Gunna was also made available via video chat and the pair of YSL rappers had their first chance to catch up for a short time following the hearing.