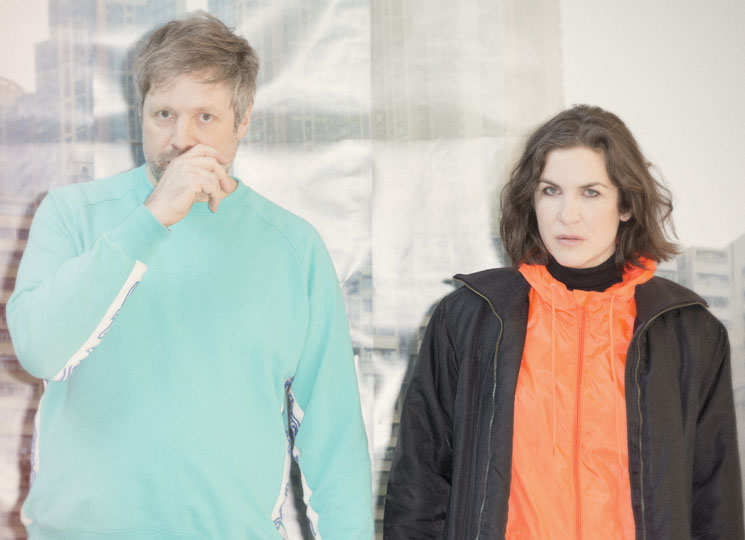 “Of all the artistic disciplines, pop music is the least interested in people who’ve been around for awhile,” laments Young Galaxy’s Stephen Ramsey. “My personal maxim is you either have to get bigger or weirder to stick around. And for us, though I think we have kind a reputation for being relatively accessible, we’ve just sort steadily gotten a bit weirder.”

Since the Montreal-based band released Falsework in 2015, he and partner Catherine McCandless have restructured both the band and their business practices. Their new album, Down Time, is being released independently after several releases with Paper Bag Records. As the band embark upon promoting their new record, Ramsey emphasizes that he’d “much rather take risks and fail spectacularly, and really live by that and not just say shit like that, because in the end, our legacy will not be the things that were commercially ble, it’s gonna be the things that felt like mutations in our process.”

Young Galaxy’s process has certainly changed, from being “on the clock” in recording studios to having their own one-room studio close to their Montreal home. “We live inside each other’s processes,” says Ramsey, in reference to his relationship with McCandless. “We’ve retreated into this place a very personal routine driving to the studio every day, picking our kids up, and really focusing on our family and this more routine existence.”

Like many artists, Young Galaxy couldn’t ignore shifts in the socio-political landscape. “There was a certain shift in the world around the time Trump. God, I can’t believe I just said his name. It was an awful feeling, and it’s remained awful, because pretty much everything that we suspected or are afraid is true, and what it’s meant is that it’s brought up a lot these old sentiments and feelings that we thought we were over. And maybe perhaps that’s my position as a Canadian white male, to say ‘I thought we were better than this?'”

It was a reality that couldn’t help but seep into their process. “How do we approach this political intensity that can’t be ignored — this elephant in the room — without writing from a political standpoint?” Ramsey describes the band as “connecting the dots between our recent experiences in the music industry, which are really frankly a microcosm what’s happening with middle class, or lower middle classes: there’s increasing inequality everywhere, in regards to the people who control these things.”

Down Time comes out independently on April 6.