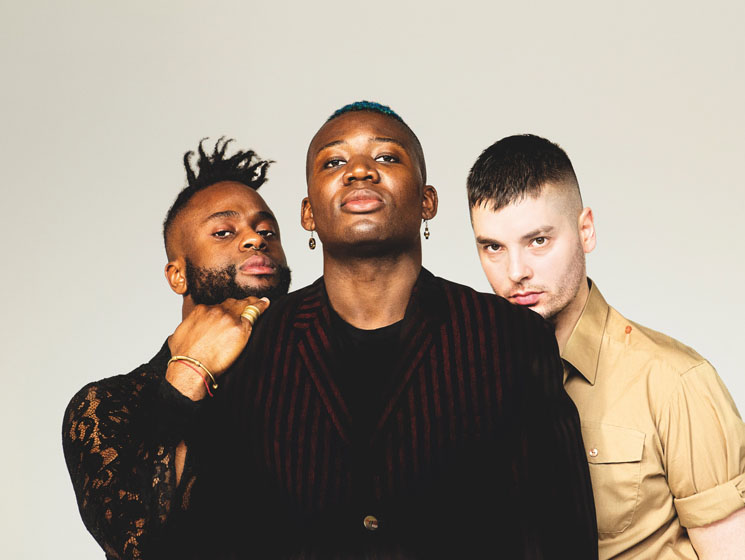 For a band that makes esoteric, genre-perplexing music, Scotland's Young Fathers have found ways to insert themselves into the mainstream. Back in 2014, they rose from obscurity and defied significant odds to win the Mercury Prize for their debut, Dead. Last year, they stole the show on the hyped soundtrack to Danny Boyle's long-awaited film, T2 Trainspotting. No matter the accolade or triumph, the Edinburgh-based trio are blasé about it all. What they really want is for people to listen more closely to their music.

"We're a real band in Scotland now. It] only took 16 years," Graham Hastings tells Exclaim! their achievements. "Of course, all these little seals approval along the way help get it to people, and also helps it seem real and not some mad leftfield thing dwelling in the corner. We've been trying to shake that since day one."

While the natural instinct might be to capitalize on their high-prile feats, Young Fathers chose to take their time following up 2015's White Men Are Black Men Too. In their eyes, there was no need to rush things with their third album, Cocoa Sugar, especially after five years constant recording and touring. Instead they reconnected with family, says Hastings, but also "got bored being this band and needed a contrast."

In that time, however, the world went through some obvious political downturns, both in their UK home and elsewhere. Hastings admits it was hard not to let the news affect how Young Fathers conducted business. They began to question everything.

"Speaking from a personal viewpoint, I lost all faith in music or politics while making this album," he says. "Never have I been less confident in my life, but weirdly my appreciation for being able to do what I do grew. I think Ally Massaquoi] was probably the opposite me in a lot ways. He was positive, but not that silly kind positivity where you talk it more than be it. He wanted to do. As did I and Kayus Bankole].

Cocoa Sugar continues to follow the unpredictable and experimental arc they established years ago with their two EPs for Anticon. In fact, the reissue Tape One and Tape Two last summer even helped conceptualize their third album.

"We were halfway through this album when the re-release happened," Hastings says. "We went from feeling] sick being the band that spawned from those Tapes at the start the new album, to then being proud all the strangeness towards the end the album process and realizing we just like what we like. We can't lose that intuition, even if we wanted to. It was good timing."

Still, Cocoa Sugar once again sounds like nothing else out there right now: the synthesizers pulsate and crash, the rhythms rumble and shake, and the three-way vocals juxtapose with a sense hope and dread. For Hastings and his mates, it was more about becoming something else, by stripping the layers away to achieve what he calls "sparseness."

"There's not much to hide behind this time — especially sonically," he explains. "That took a while to get used to. We put the reverb in the bin, so it could] be a bit more dead-sounding. So there was less 'trickery' happening. I barely touched the songs after recording. Usually I would be in for weeks. Apart from that, the attitude was different. More constructed and less 'fun' in the obvious ways, but we needed to change. You can't just wish it. We had to actually change things in order to get somewhere else."

In making these modifications, this self-described "Liberian / Nigerian / Scottish psychedelic hip-hop electro boy band" have created something even more bewildering than before. In their opinion, this is pop music, but Young Fathers know what they do can never fit inside the box.

"Our music has] always been considerably easier to make than talk about. That's the real fucking job," says Hastings. "I think we could have been one the last weird groups who enjoy a pop sensibility through music's industrialized gate before it closed. There's not much scope anymore, the industry's too organized now. There is still great music being made. That'll never stop. The problem is getting it on the platforms for people to be able to find it, and then for a level interest in it to grow."