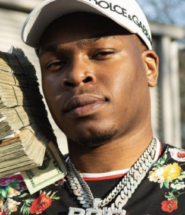 ATLANTA, GA – Several reports of Memphis rapper Kenny Muney being shot surfaced earlier this week when he allegedly suffered a pair of gunshot wounds on Monday (May 17) in Atlanta. On Wednesday night (May 19), the Paper Route Empire artist took to Instagram to clear the air and he denied ever being shot.

“Fuck fake news, this the real breaking news,” he said. “That’s why reporters, police and all them got these fake-ass stories. I did not get shot twice. I’m straight and I’m good. No n-gga hit me and I ain’t get shot. None of that. So tell that n-gga to get a refund. He ain’t shit.”

The Atlanta Journal-Constitution obtained an incident report on Wednesday (May 19) that claimed Kenny Muney was shot twice in the elbow and hip when assailants opened fire on his 2016 Mercedes-Benz G-Class SUV, which was hit with nine bullets.

The report states that the Young Dolph affiliate was treated for his non-life-threatening injuries at Grady Memorial Hospital and subsequently released.

A witness at the scene added, “I don’t know exactly what happened, but I honestly believe from what I saw it was kind of like a cut-off or some kind of an incident, maybe he tapped them or something, and it was just over a car dispute.”

This isn’t the first time the 25-year-old had been shot. Back in 2018, Kenny Muney suffered gunshot wounds and continued to perform on crutches. He was the target of another shooting just a week later at one of his shows.