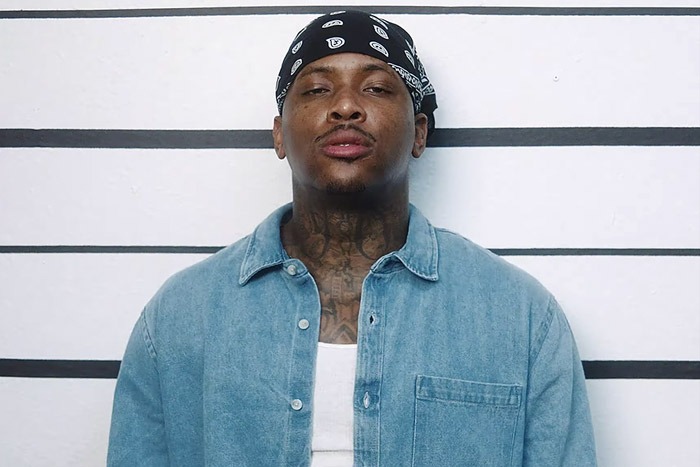 As he gears up for his new album My Life 4Hunnid, YG drops off some new heat.

On his West Coast banger “Out on Bail,” the Bompton rapper shares his testimony. “I’m out on bail, these motherfu**ers tryna get me / But I won’t tell, so with time they tryna hit me / I’m innocent as f**k but they tryna prove that I’m guilty,” he raps. “But I don’t care about what they think at all / Came in this world alone, I’ma leave alone, standing tall.”

He also pays homage to the late Nipsey Hussle. “Beefin’ with my homies, all I think about is Nipsey,” says YG. “Thinkin’ bout Nipsey, ni**a, had to get tipsy.”

In the accompanying video, directed by Austin Simkins, YG makes it rain on a prison yard and performs on top of a cop car before riding out in his red Ferrari and hitting the club.

In an interview with Zane Lowe on Apple Music, YG opened up about his latest track. “I’m putting this out first, outside of the album, because it’s really my truth, like what I’ve been dealing with,” he says. “Like when I wake up every day and I go to sleep every day, tripping out, I got these types of problems that I’m dealing with, with police and with just everything, you feel me? The court system and all that type of shit. And so I was like, this record represents the album to me. So I wanted to lead with this first so that people could have that realness before it’s time to turn up.”

His upcoming album My Life 4Hunnid was inspired by a late West Coast legend. “This album was highly influenced by Tupac. This is as far as the space I’m in and what I’m dealing with in life. He went through a lot of the stuff that I’m dealing with right now, and he was making records about it, and just the tone and the cadence of how he was coming up. I was playing with a lot of that type of sway of Tupac.”

It will also feature a collaboration with Lil Wayne called “Blood Walk.” “I went and got Lil Wayne to sing with me on a song. And the song is like, I think it’s a song that everybody’s going to love, because it sounds like it’s some street shit, but Lil Wayne shot it like the 2008 way… 2007, 2006, he sounds like that.”