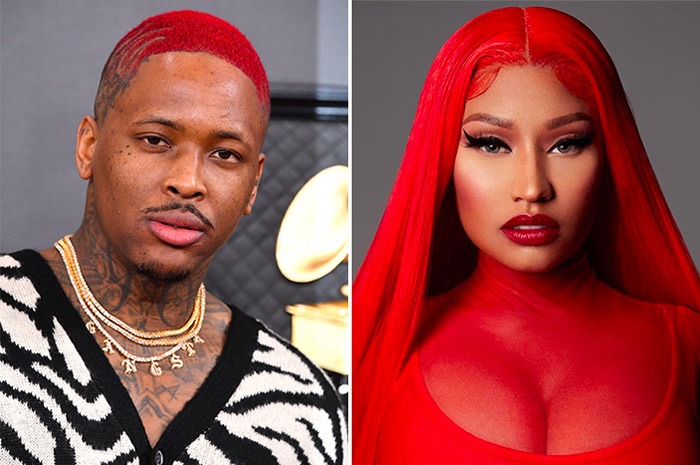 YG is no longer down with Nicki Minaj.

During an interview with Bootleg Kev and DJ Hed on L.A. radio station REAL 92.3, the Compton rapper was asked if he would work with his “Big Bank” collaborator again after she worked with 6ix9ine on “Trollz.”

YG shook his head in response to the question. “I don’t know, my feelings is hurt. I’m a real street ni**a,” he said before saying that Nicki was “canceled.”

Bootleg Kev asked if he was done with Nicki features, to which he replied, “Yeah, I’m cool.”

YG and 6ix9ine have been at odds since 6ix9ine called him out on “The Breakfast Club” in 2018. YG has called him a “pedophile ass child molester” and mocked him in his video for “Bulletproof” as well as last year’s “Stop Snitchin.”

After hearing YG’s latest comments, Tekashi responded with sarcasm. “Smh Damn Nicki u done messed up big time…..” he wrote in the comments of a Shade Room post.

Elsewhere in his REAL 92.3 interview, YG also shared his support for Kanye West’s presidential bid. “People be underestimating Kanye. He always got a plan. He a real ni**a,” said YG, who said he would vote for Ye. When informed that Kanye had not taken the necessary steps to register as a candidate, YG replied, “It’s all cap!”

On Friday, YG dropped his new single and video for “Swag,” which follows his protest anthem “FTP (F**k the Police).”