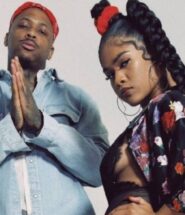 In an Instagram post on Thursday (February 18), the “Mascara” rapper expressed her excitement for the release by revealing her years-long path to manifesting “Bailar” into reality.

“When I tell Y’all I probably more excited than y’all to drop this I wrote this song over 2 years ago now and I’m finally Dropping it #NewMusic See Y’all Tonight Letss gooooo,” Sulan wrote in the caption.

Sulan commands the visual for “Bailar” with breath taking choreography coupled with her sexually-charged bilingual verses, as YG reprises his role as gangster chameleon extraordinaire and taps into his urban Latinx side. In an exclusive interview with HipHopDX last year, Sulan opened up about her past and how she transitioned from being exotic dancer at popular L.A. hangout CrazyGirls afte she initially met YG and the “Big Bank” rapper invested in her star power.

“When I first started music, my original manager linked me with [YG] and from there, he saw something in me at the time,” she recalls. “I didn’t see that same shit in myself but he saw something in me to where he pushed me … he invested in me and he really guided me as an artist. It really helped me out in this music shit as to where now I got the deal. Now we got the 4HUNNID-Epic deal. We can finally drop singles … we can get moving. It all happened so crazy because I was literally living a life that was so opposite right before this.”

Since emerging on the breakout track “Her Story” from YG’s 2019 album 4REAL 4REAL, Sulan has maintained her upward trending momentum in the form of massive streams, highlighted by the 4.8 million combined YouTube and Spotify streams her 2020 “Big” collaboration with Rubi Rose has amassed.

Watch the full video for “Bailar” below.