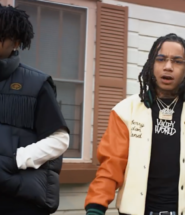 “Opp Stoppa” was all but a distant memory for YBN Nahmir before TikTok went and blew up the song well over a year later. It originally dropped in June 2019, but a sudden rise in popularity led the Alabama-bred rapper to release a remix in January with a new verse from 21 Savage. Now, it has an official video.

Released on Thursday (February 18), the Rock Davis-directed visual finds Nahmir and 21 throwing a Thanksgiving block party in a front yard, complete with friends, a box television, card games and a whole chicken cooked up on a grill. YK Osiris also makes a cameo appearance driving through the neighborhood, but gets a whole load of middle fingers thrown back at him.

“Big dawg Savage,” 21 raps. “Toss your baby mama in the air like she a salad/Ratchet bitch suck me while I’m drivin’, she from Dallas/Lil’ mama got some buns on her, I call her Patty/My model bitch be smokin’ all the ‘Woods, she from Cali’/In my Testarossa, my pistol out the holster/I’m double cuppin’ syrup, bitch I don’t need no coaster.”

During a recent interview with VladTV, Nahmir discussed the song making waves on TikTok and hitting over a million videos on the platform.

He also gave credit to social media personality Addison Rae for the success of “Opp Stoppa” and making it a trend, even though she might not know the meaning behind it.

“She doesn’t even know what it means,” he laughed. “But that shit is crazy. Salute to Addison Rae because without her, iono you feel me, I’d be doing good, but she pushed my song to a whole different level to where it’s like, ‘Ooo, let’s pay attention to this,’ and everyone pays attention to it and everyone likes it because it’s a good song.”

Nahmir also explained how 21 randomly hopped on the song and how much it’s done for his career in a short amount of time.

“It wasn’t nothing that I put together,” he said. “I didn’t put it together by myself so it was just crazy, I didn’t expect it. And it meant a lot to me for 21 to hop on it ’cause he’s one of the main artists down in Atlanta, especially down South. It’s just like a little status he put on me and I proved to myself damn near I can do mad shit.”

He added, “I just appreciate cuh for hopping on there right now ’cause it pushed a lot of stuff for me. Not just the song, but it put a lot of opportunities in front of me and I appreciate him for that.”

Watch the “Opp Stoppa” video above and DJ Vlad interview below.