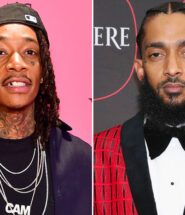 To commemorate the 10th anniversary of his major-label debut album, the Taylor Gang rapper has re-released the project with four bonus tracks including “Middle of You” (featuring Chevy Woods, Nikkiya and Poo Bear), “Stoned,” “Taylor Gang,” and “Black & Yellow (G-Mix)” with Snoop Dogg, Juicy J, and T-Pain.

According to Wiz’s label Atlantic Records, Nipsey was originally featured on “Hopes and Dreams,” but it was never released “due to clearance issues, despite the two farsighted rapper/entrepreneurs’ long friendship and close personal bond.”

Rolling Papers, which was released March 29, 2011, was certified double platinum and spawned hit singles including “Roll Up” and “Black and Yellow.” Wiz has also released a merch collection in honor of the album’s anniversary, while a vinyl edition will be available later this year in limited edition colors.