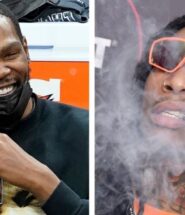 Los Angeles, CA – Wiz Khalifa has revealed that he once caught NBA champion Kevin Durant lacking in the club after being snubbed by him earlier during a night out partying.

During a brief Instagram live session celebrating the Taylor Nights playlist on Thursday (February 18), Wiz took a trip down memory lane, seemingly inspired by a big bottle of McQueen Gin and an even bigger joint, and broke down how Durant ditched him that fateful night after initially inviting him to hang out.

KD’s shortfall clearly struck a nerve with Khalifa Man, who proceeded to detail his mission to gain entrance into the club and make the Brooklyn Nets’ star save face for hanging him out to dry outside of the venue.

“But what I did, though, I went, I got back right and I came back in the club and I met him in there, you know what I’m saying,” Wiz continues. “Cause I’m not no slouch, you feel me? No love lost.”

Rap stars and all-star ballers have led a crossover renaissance as of late. In fact, KD’s teammate James Harden’s Houston home recording studio has been utilized by plenty of their Hip Hop friends such as Meek Mill and Lil Baby, who says he hopped on a Drake track at the shooting gaurd’s crib last year.

LeBron James has also been linked to several rap artists including 2 Chainz, who recruited the Los Angeles Laker’s star to A&R his 2019 Rap Or Go To The League album.