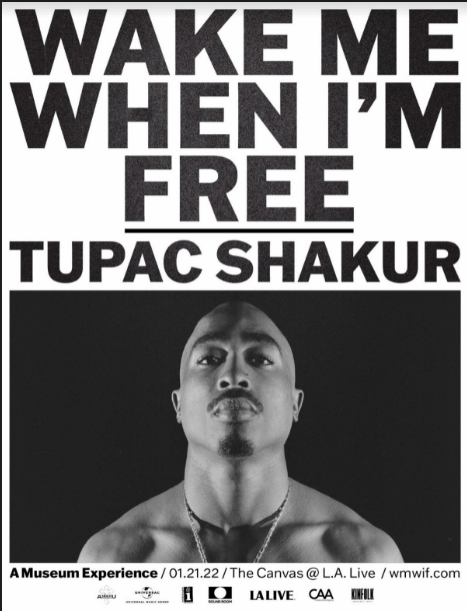 The Shakur Estate has announced today tickets are on sale for the world premiere of Tupac Shakur. Wake Me When I’m Free, a fully immersive, thought-provoking museum experience that explores the life and legacy of the acclaimed artist and activist. Tupac Shakur. Wake Me When I’m Free (WMWIF) will open on January 21, 2022 in Los Angeles, CA at The Canvas @ L.A. Live, Georgia Street and Olympic Boulevard, and run for a limited time only. General tickets are on sale on WMWIF.com.

Twenty-five years after his murder, Tupac Shakur remains one of the most complex and prolific artists of his generation. With over 75 million albums sold worldwide, he is one of the top-selling artists of all time. In 2017, Tupac was inducted into the Rock & Roll Hall of Fame, making him the first solo hip-hop artist to be recognized for inclusion in his first eligible year. Tupac also found success and critical acclaim as an actor, starring in popular films like Juice and Poetic Justice.  A brilliant lyricist and critical thinker, Shakur can be described as a social observer and a political activist devoted to social change. Born to a Black Panther and named after a Peruvian revolutionary, Shakur seemed fated to reject authority and give voice to the disenfranchised.

Tupac’s mother and Black Panther Afeni Shakur (1947-2016) played a prominent role in Tupac’s life and her spirit brings a moving and parallel presence to WMWIF.  Tupac’s Godfather and Special Advisor to the Estate Jamal Joseph said, “Afeni was the baddest Black Woman to walk the planet.  She raised awareness and shifted the atmosphere wherever she went.  Tupac’s brilliance shined brighter than the Sun. He lived and moved with creative – revolutionary- fearless-passion fueled speed of a comet. Afeni and Pac challenged, re-imagined, and transformed history.”

Part museum, part art installation, part sensory experience, WMWIF will showcase Shakur’s music, poetry and never before seen artifacts in a 20,000 square foot curated space akin to a contemporary art museum. Guests will transition through a myriad of surround sound spaces, rich with rarities embedded in technology. WMWIF will delve into the greater meaning of his activism, music, and revolutionary art. The attendees will be educated and enlightened through a labyrinth of emotions as they take this journey through his extraordinary life.

See the Wake Me When I’m Free trailer HERE.