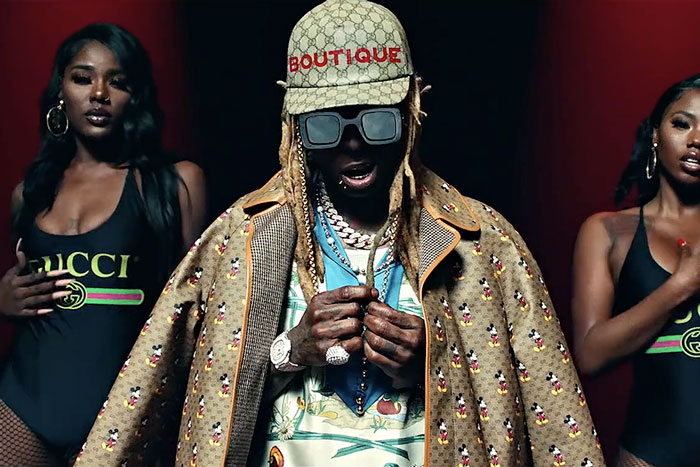 Lil Wayne brings his lyrics to life in the wild video for “Mama Mia.”

The trippy clip finds Weezy rocking a Wu-Tang hoodie while surrounded by scantily-clad ladies, crocodiles, apes, and even a rapping baby. He changes outfits multiple times, from a Gucci x Disney jacket to a Moschino x Budweiser hoodie and sweatpants. Tunechi totes a gun in one scene and performs alongside a naked rapping woman before the video ends with a red casket going up in flames.

Speaking with “MTV Fresh Out,” the Young Money boss opened up about the concept. “The video, I tried as much as I can to put the visual to the words. I came up with the treatment and it just worked,” he said.

The track also features a Harry Potter reference (“I’m a wizard with this mothafucka like I went to Hogwarts”), but he is not a Potterhead. “Truth be told, I know nothing about Harry Porter,” said Weezy, who admitted that he just needed to make the rhyme work. “I still don’t know what it means, just know it has something to do with Harry Potter and I made it work.”

“Mama Mia” can be found on Wayne’s fifth No. 1 album Funeral, which also features Big Sean, XXXTentacion, and Lil Baby. Weezy recently appeared in the latter’s video for “Forever.”