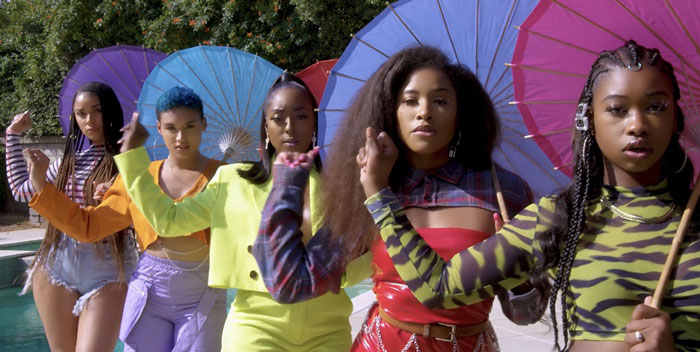 June’s Diary, who rose to fame after being discovered by Kelly Rowland and Frank Gatson on BET’s “Chasing Destiny,” drop the first visual from their 2019 project Take Your Time.

In the playful video for “I Ain’t With It,” premiering exclusively on Rap-Up, the R&B quintet celebrates their freedom from gender roles and relationship expectations as they embrace agency and each other. Whether cruising in their Jeep or throwing a sleepover, the ladies prove they don’t need a relationship to bring them happiness.

“This video is for all the fans who continue to ride for us and a testament to what we can accomplish together as artists,” June’s Diary tells Rap-Up. “We created a world in which women aren’t tied down by relationship expectations or gender roles, in general. No catcalling, no emotional or physical abuse, and no controlling behavior. We can have our fun too so don’t get it twisted, we are on our own team!”

“I Ain’t With It,” which they co-wrote, marks the first new music from June’s Diary since their 2018 debut EP All of Us, and the first video they’ve released independently as a group.