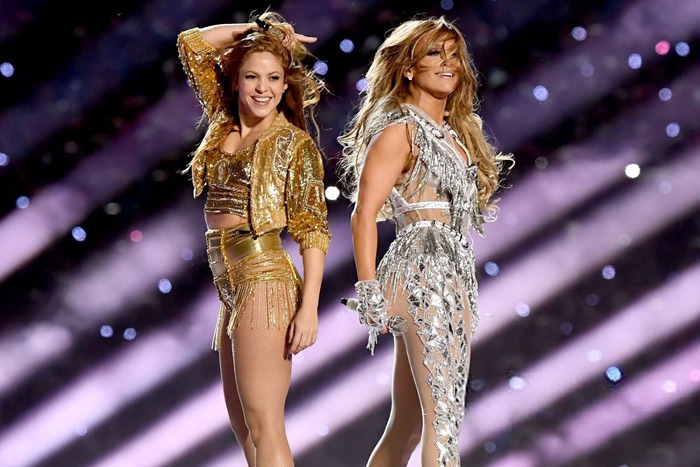 Jennifer Lopez and Shakira showed up and showed out on the biggest stage on earth, the Pepsi Halftime Show, during Super Bowl LIV in Miami on Sunday (Feb. 2), which featured pole dancing, hip shaking, and a cameo from J.Lo’s daughter.

The Latin superstars took the field at Hard Rock Stadium for a 14-minute spectacular that kicked off with Shakira. Dressed in a sparkly red midriff-baring outfit, Shakira—who celebrated her 43rd birthday today—launched into “She Wolf” followed by “Empire.” After hypnotizing with her belly dancing, she went into “Wherever, Whenever.” As fireworks lit up the night sky, she brought out Bad Bunny for his verse on Cardi B’s “I Like It.”

The Colombian songstress also paid homage to her roots with “Chantaje” before delivering her 2006 smash “Hips Don’t Lie” while crowd surfing. “No fighting,” she said at the end before making way for J.Lo.

The Bronx bombshell entered on a sculpture of the Empire State Building while performing her 1996 hit “Jenny From the Block.” Dressed in a black cutout Versace catsuit, she continued with “Ain’t It Funny” and “Get Right” before changing into a sparkly stunner for “Waiting for Tonight.” As green laser beams shot across the field, J.Lo showed off her Hustlers moves on the pole.

J Balvin repped Latino gang while performing “Mi Gente” alongside J.Lo before her 11-year-old daughter Emme stole the spotlight while singing “Let’s Get Loud.” With Shakira on drums, J.Lo performed with the Puerto Rican flag draped across her back as her daughter sang “Born in the USA.”

They capped it off with a fiery medley of “Waka Waka (This Time For Africa)” and “Let’s Get Loud,” complete with tribal dancing and salsa moves, before standing side by side for the triumphant finale as fireworks exploded over the stadium.

“Muchos gracias!” said Shakira, while J.Lo added, “Thank you so much.”

The performance received rave reviews from fans and friends including Lady Gaga, Pink, Kim Kardashian, and Cardi B, who was seen singing along during J.Lo’s performance. See some of their tweets below.

. @JLo and @shakira and all the special guests were so incredible!!! What a fun halftime show I danced and smiled the whole time. Such powerful y women!!!! On camera and off!!!!! Love you beautiful y talented women 💕💋 #SuperBowlHalftimeShow #SuperBowl

AMAZING!! She ABSOLUTELY CRUSHED IT! Wow, that was so fun!

I’m so proud of you, Jen! ❤️ @JLo pic.twitter.com/bD07MLcKYx

Damn son….. #PepsiHalftime ….they came for blood like a That was friggin impressive. Not mad at tall