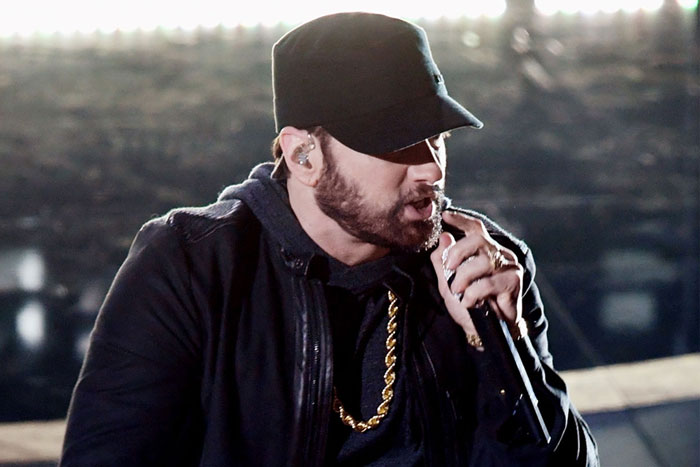 Seventeen years after winning the Oscar for Best Original Song, Eminem performed at the Academy Awards for the very first time.

Following a package on iconic songs from movies, the Detroit rapper shocked the crowd by taking the stage during the 92nd annual ceremony at the Dolby Theatre in Hollywood in Sunday (Feb. 9). Accompanied by an orchestra, he performed his Oscar-winning song “Lose Yourself” from 2002’s 8 Mile. Many in the audience were stunned, while others sang along including Gal Gadot, Anthony Ramos, and Zazie Beetz. By the end of the performance, the crowd was on its feet.

“Look, if you had another shot, another opportunity… Thanks for having me @TheAcademy,” Em tweeted following his surprise set. “Sorry it took me 18 years to get here.”

“Lose Yourself” won Best Original Song at the 75th Annual Academy Awards in 2003.‬‬‬‬‬‬‬‬‬‬ Eminem was not present to accept the award.

The 2020 Oscars kicked off with a film-inspired performance from Janelle Monáe, while Billie Eilish performed during the In Memoriam segment.