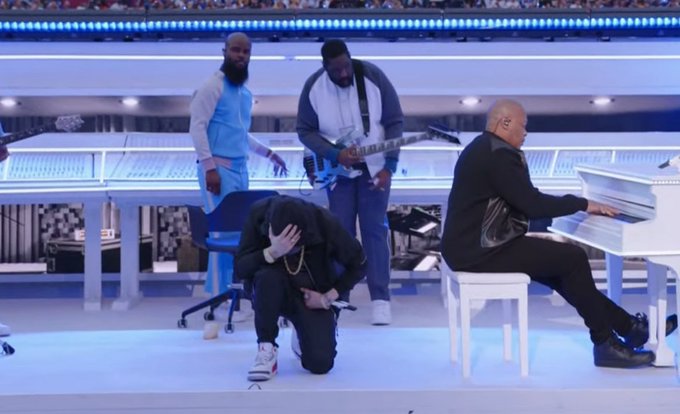 During his part of an epic Hip-Hop Super Bowl halftime show, Eminem took a knee on stage following his performance of “Lose Yourself,” just as Dr. Dre began to play the piano. Speaking with TMZ after the historic performance, Dr. Dre put to bed rumors that the NFL did not want Slim Shady to do that action.

“Em taking a knee, that was Em doing that on his own,” Dr. Dre said. “There was no problem with that.”

Ahead of the performance, Puck reported Eminem and the NFL had a disagreement about his ability to kneel during the show. The NFL had reportedly told Eminem he could not kneel “Colin Kaepernick-style” during the set. League reps would deny the report to the New York Post.

Dre would reveal that Kendrick would have to remove the “If Pirus and Crips all got along” lyric from the start of “m.A.A.d City”

You can see the moment from Eminem below.