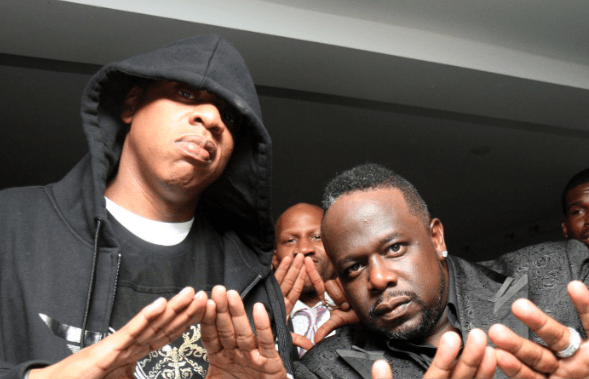 JAY-Z’s 2003 The Black Album boasted a myriad of guest appearances. Still, one of the most memorable yet uncredited appearances was “King Of Comedy” Cedric The Entertainer in between Hov’s verses on “Threat.”

While a guest on  William “Fuzzy” West and Quincy Harris’ FAQ Podcast, the 58-year-old comedian explained how he talked his way into an appearance on the album after a chance meeting with Jay=Z in New York.

“It was random,” he said. “I was in there, watching him do his thing. The Black Album was his last album so I pitched him an idea. He was on his way out and I was like, ‘Yo man, I’ve been having this funny idea of doing the Beverly Hills Cop thing with you. He was like, ‘Oh, that’s funny. I like that. But I’m working on this song called ‘Threats’ that I need somebody just threatening people on.’ I was like, ‘Aiight!’ So then he left and it was me and [Young] Guru. I just went in there and freestyled that shit! Just was making it up, having a good time.”

Young Guru and the song’s producer, 9th Wonder, recall the recording session with Cederic The Entertainer, with Guru adding on social media, “@cedtheentertainer man we had a great time making that song,” he wrote. “First off I was super excited that @9thwonder had the possibility of making the album. @cedtheentertainer is really a ‘King of Comedy’ because he did at least 30 minutes of complete freestyle. That night was one for the books.”