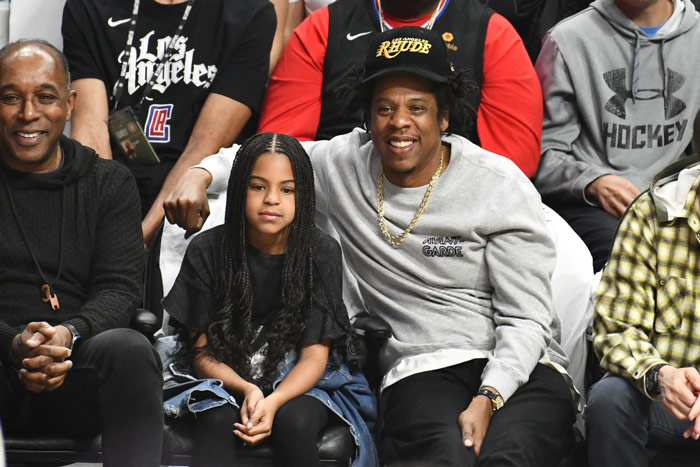 JAY-Z and Blue Ivy enjoyed a father-daughter night at the Lakers game on Sunday.

Following the Lakers win over the Clippers at Staples Center, Hov greeted his pal LeBron James on the court along with his 8-year-old daughter, who was seen nervously asking the NBA champ for a signed basketball.

Cameras captured a bashful Blue as she told her dad that she wanted LeBron’s autograph before he seemingly told her that she would have to ask herself. She eventually mustered up the courage and told LeBron.

“OK, I got you,” said King James in the video, which received over 2.5 million views.

LeBron, Jay-Z and Blue Ivy after the Lakers’ win 🤝 pic.twitter.com/g58Bw9xJ7U

LeBron promised that she would have it the next day. “By the time you get out of school on Monday, you’ll have it,” he told Blue, who was all smiles.

JAY-Z was involved in his own viral moment on the court when a man approached him after the game. Business executive Irving Bauman was seen putting his arm around the Roc Nation mogul, who didn’t seem to take kindly to the overly friendly gesture and brushed him off.

Sunday’s Lake Show was a star-studded affair. Despite coronavirus concerns, the Staples Center was packed with celebrities including John Legend, Chrissy Teigen, and 2 Chainz.

.@DGreen_14 and @JalenRose having a quick chat with Jay-Z @S_C_ pic.twitter.com/vSKp0xoMUh