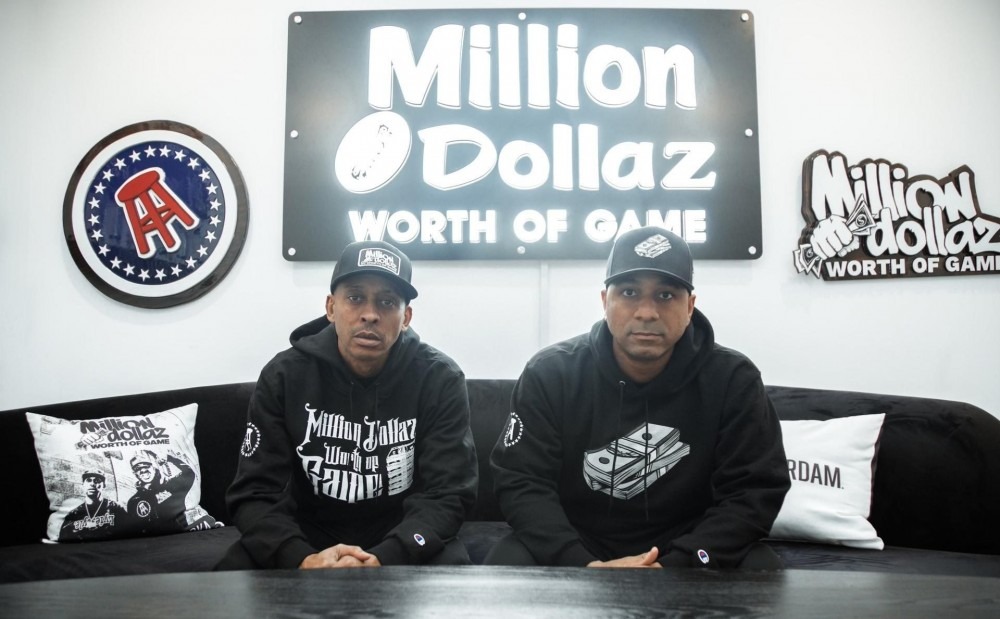 Through their insightful questions and doses of digestible gems, Wallo and Gillie have become two of the most influential and insightful voices in the game. In a conversation with The Source, the star podcast duo detailed how they manage to keep their brand successful, giving back to the community alongside Bar Stool Difference and more.

For people who may have come across your brand or you two individually but don’t know a lot about your history, how did Million Dollaz Worth of Game come about?

Wallo267: Well, he’s been doing that for years. I was in prison, and Gillie used to do these posts on Instagram for a Million Dollaz Worth of Game. He had an album come out called Million Dollaz Worth of Game. You know, this guy was giving 15 seconds on Instagram. He said a little, you know, give you some game. And it’s always been that, and a couple years ago, we decided to do a podcast. A lot of people were asking us for it. We saw that Spotify wasn’t playing, cutting the checks about it. So we said, let’s jump in the game. We jump in, and in the first week, we are on top of the charts, so we keep going. This is my cousin. So I did time, and we always used to be together before I went to jail. Back in the day, we started a group called Major Figures, but I went to prison. But when I came back home, we went right back to living life.

Have you ever really considered how much of a blessing your presence is to your viewership? That energy shows for sure. As you said, you’re putting out that Million Dollaz Worth of Game to people, but it’s entertaining.

Wallo267: You know us. We just share our real life. He and I have been around some real stuff from the streets and life. We connected to a lot of different people and situations where we got a lot of information to share with these guys and hopefully upgrade their life.

You all are also providing blessings in the Bar Stool Difference platform in your hometown of Philly and expanding nationwide. I saw a video with the Fathership Foundation, and it was just like so much raw emotion in that. How does it feel to be able to impact your community?

Gillie Da Kid: Man, it’s a beautiful feeling. Cause one thing about us, we always help people. We are always willing to give our time and try to do things with people that are less privileged, especially minorities and the ghetto, because that we come from. So we have always been doing this, but it’s a little different to help people and see the expressions. It is indescribable. You gotta appreciate and feel it. I can’t put into words the feelings of witnessing these people be so thankful and appreciative when somebody comes to save their business or help their nonprofit.

Wallo267: The reality is some of these people have never been given anything in life. So for somebody to come through and bless you was an unbelievable feeling because they like everything I got, I worked hard for. Nobody ever gave nothing.

What attracted Bar Stool to you guys to be the platform of your choice?

Gillie Da Kid: Because David Portnoy is kind of like a Caucasian version of myself. He speaks his mind. He don’t care about no people’s feelings. And I understood that he was controversial. And the one thing about him is that some people go through a controversial time, and Dave, that doesn’t break him. You know, Dave is an unbreakable person. And I understood that. I might sometimes say something that I actually didn’t mean to say, or it might have come out the wrong way. And if I ever had to go through some controversy, I knew Bar Stool would stand with me. Cause that’s what they built for. They have already been through that process. A lot of these companies, soon as you go through a little something, drop you.

What was the origin of the Difference program? Was there a mutual interest in helping, and it came together, or did you bring the idea to them?

Wallo267: It already was in existence. When Covid happened, somebody challenged Dave to help people, and he went and raised a ton of money. e even saved the terminal market here in Philadelphia that was going to go out of business. There was a bunch of money raised, and they came to us to ask, “what y’all wanna do?” We talked with Erika about it. Shout out to Erika Nardini. She is a major reason we came over there too. We got together, and next thing you know, we were passing this money out.

Gillie Da Kid: But honestly, they had the money for businesses all over the country, and a lot of African American businesses and minority businesses didn’t apply. And that’s where we come in. Cause when we tell you to apply, you will apply.

Your podcast experience is different in general. I love that y’all aren’t confined to a studio space. You all came to Chicago in an episode and were hanging out with Lil Durk. Y’all will pop up anywhere. What experiences with the pod are where you had your best time?

Gillie Da Kid: For me, Lil Durk is one of my favorite artists. So definitely going to Chicago and sitting down with all those youngins in the streets – that was everything for us. But I also enjoyed DaBaby. We went to DaBaby’s house the second time, and I enjoyed the hospitality and realness that he got with him. I appreciated that interview a lot. Young Thug interview, he ain’t want us to leave the studio. We were there for six, seven hours; it seemed like. We went to Kevin Durant’s house, I’m a big sports guy, and he’s one of the greatest of all time. King Von, because you look back at the situations that they are in and the advice we gave him when King Von was here and the things that King Von said really it home.

It’s so many podcasts out there, and y’all stay on top of your game and on top of listeners’ minds. How do you manage the business side of it and keep it fun? And in addition to that, do you feel like you compete with other podcasts that are out?

Wallo267: No, we are not in competition with nobody because that’s not our thing. Our thing was just to do us, and we were locked in a space nobody wanted to mess with. Nobody wanted to mess with the young folks. Nobody. So we connected with them. We gave them a platform, looking out for the young boys, and nobody focused on that. So we are not in competition with nobody. We don’t see nobody in that way. It’s enough money for everybody. It’s enough space for everybody on this planet. We stay on top of our game because we ain’t gotta act. We get up and be us all day.

Gillie Da Kid: I want to get Drake.

Gillie Da Kid: I want Denzel Washington, Will Smith, people like that. I want to interview one of the Kardashians. What they have been able to do out here has been tremendous. Our whole family that’s worked with everybody and a family. Have they worth a billion dollars? There are a lot of people we would like to talk to Kevin Hart, Ryan Garcia, and plenty of names.

In addition to that, what do you envision for the Million Dollaz Worth of Game brand or even individually for yourselves?

Wallo267: Oh, the brand we get big. We got a lot of things we are working on. We don’t like to speak, but rather show. So we just grounded, but it’s some big stuff coming.