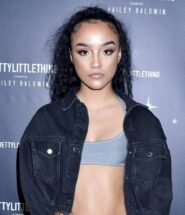 The late Lexii Alijai‘s estate has put together her first posthumous offering since her passing just over one year ago.

The seven-song Come Back Soon EP features appearances from Wale, P-Lo and Kyle Banks, and arrives on what would have been the rapper’s 23rd birthday. Alijai passed at the age of 21 from a fatal overdose in January 2020.

A documentary was paired with the release, giving an in-depth look at the life and career of a young talent gone too soon.

“This has been the hardest part of my life, but Lexii’s fans were so important to her, so I’m glad we can get her music out for them,” Alijai’s sister Rajai Lynch said. “The world knew her as Lexii, but to me she was Alexis, my little sister who still means everything to me.”

new @lexiialijaii project out now. so bittersweet. you won’t see all the beauty you bring to the world with these new words, im so grateful your family and team worked so hard for this to come out

The granddaughter of the legendary Roger Troutman of Zapp & Roger, the St. Paul, Minnesota native had been making music since she was 16 and started achieving national success in 2015 when she appeared on Kehlani’s Grammy-nominated mixtape, You Should Be Here. The then-17-year-old was one of only four features on the project, which also included Chance The Rapper, BJ The Chicago Kid and Coucheron.

Come Back Soon follows 2017’s Growing Pains, which was the “Jealous” rapper’s debut effort and what would be the last release before her passing.

Stream Come Back Soon below and watch the documentary up top.