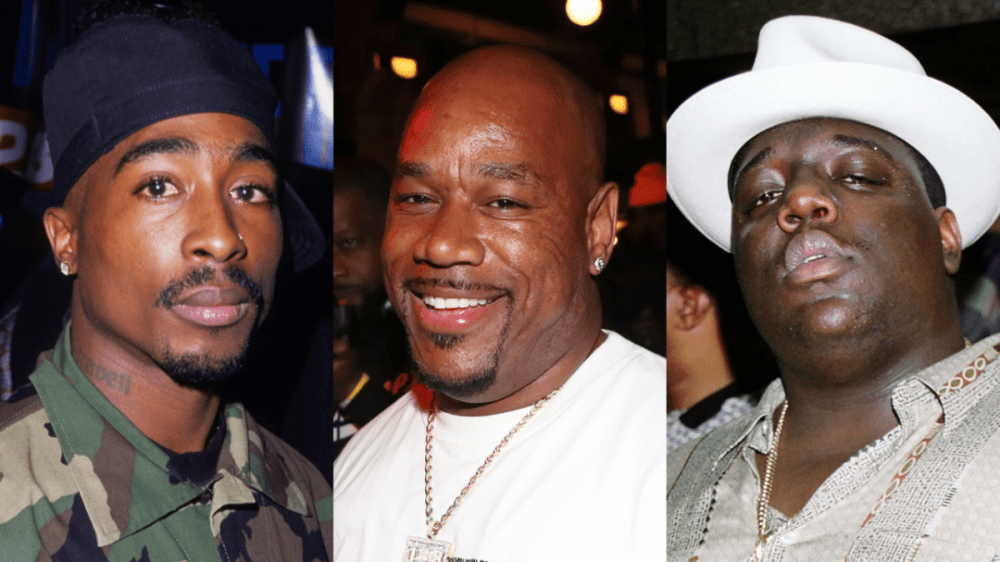 Wack 100 is never afraid to speak his mind, even if it means ruffling feathers — and he unleashed another hot take recently, this time involving two of Hip Hop’s most cherished figures.

During a guest appearance on The Game‘s Drink Champs interview with N.O.R.E. and DJ EFN, the veteran music manager — who reps Game along with Blueface and Ray J — claimed that 2Pac was a “legend” when he passed away in September 1996, but his bitter rival The Notorious B.I.G. — who was killed six months later — wasn’t.

“2Pac died a legend; Biggie didn’t,” Wack declared. “His body of work, movies, double CDs, albums that went quadruple [platinum]. Biggie was dead before his [second] album came out. He became [a legend after he passed away]. Over the years muthafuckas remade songs, movies — he became that.”

Wack 100 also challenged the notion that Nipsey Hussle was a legend when he was shot and killed in March 2019, arguing, “I’m saying [Nipsey] will become a legend. It still hasn’t happened. Movies gotta happen, shit gotta happen. He’s only been gone, what, two years?”

Wack’s comments echo those he made about the late Victory Lap rapper in November 2019. “The man died with a million followers. No radio hits. No platinum hits. No world tours,” he told TMZ.

“After he died, he went platinum, sold a bunch of records, followers went up nine, 10 million … Was he on his way? I think within time, yes he would have been. At the time of his demise … let’s keep it real. The truth can’t be defined as disrespect.”

The Game also weighed in on the 2Pac and Biggie debate by bringing Jesus (yes, Jesus) into the equation.

“Do we know how long Jesus was giving n-ggas the gospel before Judas ran him into the Romans and they killed him?” he pondered. “It might be a history lesson in that for all of us. Nip put his album out and then perished, but he was great to the people who knew he was great — but not to the world because n-ggas didn’t service his music while he was here like that.

“Same with Biggie. Biggie died before Life After Death came out; he was here for the first. So on the same accord, does anyone know was Jesus on his first album or his second album? … We need to figure that out and then let that be the ledger for what ‘legend’ is.”

Wack 100 wasn’t the only one firing off hot takes during the Drink Champs episode. The Game stirred the pot by claiming he’d smoke Eminem in a Verzuz and saying Kanye West “did more for me in the last two weeks than [Dr.] Dre did for me my whole career.”

Game’s latter remarks reignited his long-running back-and-forth with 50 Cent, who shared a screenshot of his former G-Unit signee’s comments on Twitter with the caption, “Hun, what happen here.”

The Game fired back by tweeting, “Last time you did this with me, G-Unit clothing got put in a casket with the entire group & you went into television. I like Power n shit … leave it alone. I’m back outside!”