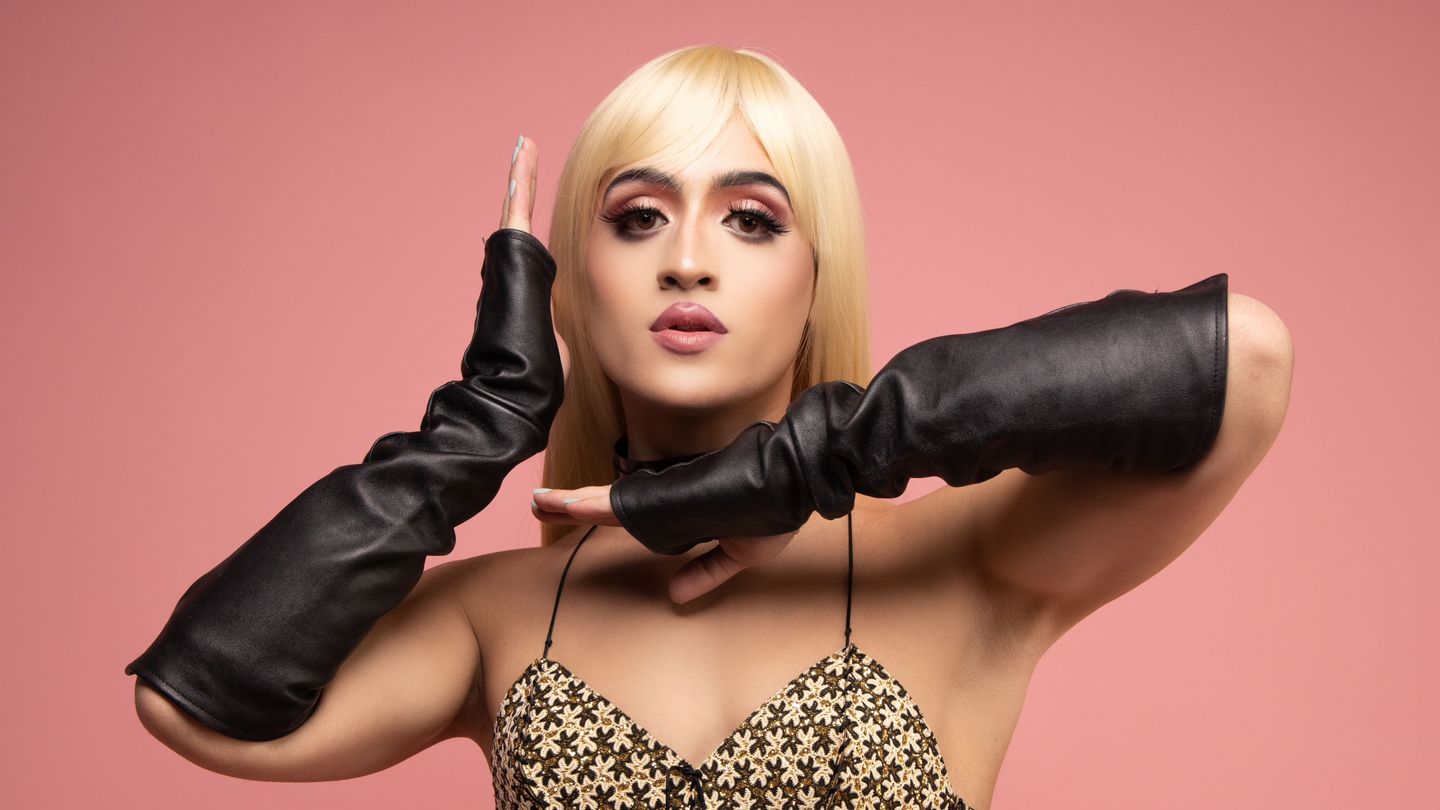 In Latin rap, a genre largely dominated by cishet male artists in the spotlight, Villano Antillano represents the communities still in the shadows: the LGBTQ+ community and women. The Puerto Rican rapper, who is transgender and nonbinary, centers her local community in her playful new music video for the thumping track “Muñeca,” shining through with every color of the rainbow. She teams up with Ana Macho, another Boricua artist, in the pink-hued visual that finds them running a sex shop with other trans folks as customers line up around the corner. They proudly reclaim the word “muñeca,” the term often disparagingly applied to trans sex workers in Puerto Rico.

Since breaking out in 2018, Villano, whose name translates to “villain” in English, has been on a mission to normalize and represent the queer perspective in spaces that are dominated by machismo, or toxic masculinity, like in Latin rap, which includes reggaeton and trap music. She does it by donning a sexy doll-like dress, her blonde wig, and bright red lipstick in the “Muñeca” clip.

“Villano Antillano is who I am,” she tells MTV News. “Going back to shows like The Powerpuff Girls and many Disney movies, the villains have a lot of queer characteristics. I’m playing with that mindset. They’re the bad guys, so to speak, but they always end up being better than the heroes in my opinion.”

Reclamation is a strong theme that runs through Villano’s music. In 2018, when Puerto Rican rapper Anuel AA released a dis track aimed at fellow rapper Cosculluela that used homophobic language, Villano fired off the response track “Pato Hasta La Muerte.” She turned Anuel’s “Real Until Death” tagline into the empowering “F-g Until Death.” In last year’s knockout track “Pájara,” Villano reclaimed more homophobic slurs in Spanish with her fierce flow. “Someone had to say something, and it was me, but it could’ve been any of us,” she says.

Machismo, which is rooted in Latinx culture in Latin America and the United States, is part of the misogyny that’s killing women in Puerto Rico. A state of emergency was declared on the island in January against the femicide that’s disproportionately affecting Black and brown trans women. In the mainland U.S., attacks against trans women have also risen. “I don’t feel safe and I worry for my sisters in the community and my sisters by blood in my family because no one knows if we’ll be next, and it shouldn’t be that way,” Antillano said. “And in this space that we’re fighting for, we have the saying, ‘If they touch one of us, they touch all of us.’”

Villano talked with MTV News about pushing back on machismo, leading a new wave of queer representation in the Latin rap scene, and her hopes for what’s next.

MTV News: How do you feel to be representing the LGBTQ+ community in Latin rap?

Villano Antillano: I feel very cabrona (badass). I feel spectacular because this is something that’s had to happen for a while now. To open that door means a lot to me. It cost the lives of people that came before me, like [Puerto Rican rapper] Kevin Fret and [Dominican dembow artist] La Delfi. It’s all from different circumstances, but they were people who were breaking through. It means a lot because I feel like trap and rap are weapons in social movements. If you look back, those artists have been agents of change in social movements. Rap is a weapon of consciousness. To occupy the space for me is activism and representation.

MTV News: That’s like the saying: “My existence is my resistance.”

Antillano: Exactly! That’s the thing, and that’s the gist that people pick up on and they can relate. It doesn’t matter if you’re part of the community. I think when you see someone that’s being authentic and being fearless, it motivates you regardless of who you are or where you come from.

MTV News: What was the inspiration for your single “Pájara”?

Antillano: I’ve lived my whole life being thrown a lot of different slurs in the Caribbean that all tie back to the birds. It’s a strange connection that these words have to the community or effeminate men. Pajaros, patos, plumas, all of these animals that fly. For me, those are terms that I’ve reclaimed as terms of empowerment. Of course, I’m a f-g, and my friends are those words, but heterosexual people can’t call me that. In Puerto Rico, it’s percolated into something that signifies like “bro,” and I’m like, “Excuse me.” We gotta take it back, and we have to have those conversations and ask, why do you think you can use those words? It’s something they always call me and that’s who I am, so I’m going to flow with it.

MTV News: What was the experience like to work with Ana Macho in “Muñeca”?

Antillano: That was a blessing because me and Ana Macho have mutual respect and admiration for each other. Ana Macho is a complete artist. With “Muñeca,” we take it even further, and we play with the term. Only the girls could do it. It just had to be us. In the video, it’s all girls who are my friends. It’s all trans people. For me, it was very important that everything surrounding this song is trans and of the trans experience. It’s very empowering.

MTV News: How did you feel when Puerto Rico called a state of emergency for the high femicide rate?

Antillano: Machismo is what we’re taught and what we live in this country. That’s why there’s so much of that here. Men can be violent in different ways. There are people working to deconstruct that, but it’s hard work. There’s a lot of fear. There’s a lot of worry.

Recently there was the case of Felix Verdejo, and that destroyed me. I had to take a step back for a few days and process it. Me and my friends live in a constant state of hurt. There’s no action by the government. One of the things they said they were going to do with that state of emergency was send an Alerta Rosa text message when someone is missing or there’s a case of femicide, and we haven’t received those messages. Women go to the police all bloodied and they don’t do anything about it. Literally, they’re killing us. It’s the way that we grew up, the culture that we have, that we’re working to change. Me and all the women that are in this genre, we’re public figures and we’re giving visibility and exposure, and we run a risk, but it’s a risk that has to be taken by someone.

MTV News: What do you hope to accomplish with your music?

Antillano: World domination! I’m coming for the world. A lot of the things queer people in Puerto Rico and the world are doing is permeating pop culture, so I feel like this is very long overdue. Queer people, we can’t be in the background — we have to be in the spotlight. I shouldn’t have to minimize my dreams because the world tells me to. I can have the same aspirations as everyone else. I want to work towards progress and a better future that’s more tolerant and respectful. That’s going to happen with time. That’s going to happen when we take up space with force. I didn’t come here to ask for permission. I didn’t come here to be accepted. I came here because I am here and for people to see that is inevitable. I hope that from seeing me and hearing my music, more people can live authentically in their everyday lives.