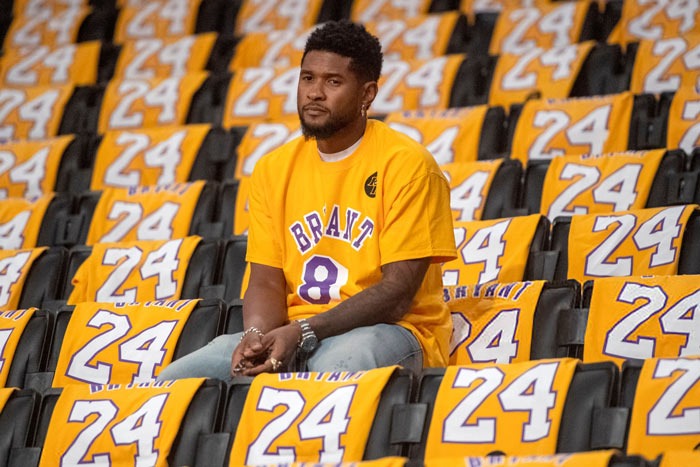 Last night, friends and fans gathered at L.A.’s Staples Center to pay tribute to Kobe Bryant before the Los Angeles Lakers took on the Portland Trail Blazers during the Lakers’ first game back since the death of the NBA legend last Sunday.

Accompanied by a pipe organ, Usher took the court to perform a moving rendition of “Amazing Grace” while standing in front of two floral arrangements with the numbers 8 and 24, Bryant’s Lakers numbers.

The somber singer was photographed earlier in the evening sitting in the stands amongst a sea of Bryant’s yellow jerseys. In the wake of his passing, Usher posted a photo of himself with Bryant, writing, “Missin you …”

Just days after their Grammys tribute with Alicia Keys, Boyz II Men delivered an emotional rendition of the national anthem while wearing Kobe Bryant #8 shirts. LeBron James was seen wiping away tears alongside his teammates before addressing the crowd with a touching tribute to Bryant.

“Now I know at some point we will have a memorial for Kobe, but I look at this as a celebration tonight,” said James. “This is a celebration of the 20 years of the blood, the sweat, the tears, the broken down body, the getting up, the sitting down, the countless hours, the determination to be as great as he could be. Tonight we celebrate the kid who came here at 18 years of age, retired at 38, and became probably the best dad that we’ve seen over the last three years.”

During halftime, Wiz Khalifa and Charlie Puth performed their chart-topping collaboration “See You Again” in honor of Kobe, his 13-year-old daughter Gianna, and the seven others who lost their lives in Sunday’s helicopter crash.

“Rest in peace to the late great Kobe Bryant,” said Wiz at the end of the performance. “Peace and blessings to his entire family. His legacy is gonna be remembered. We love you, Kobe.”