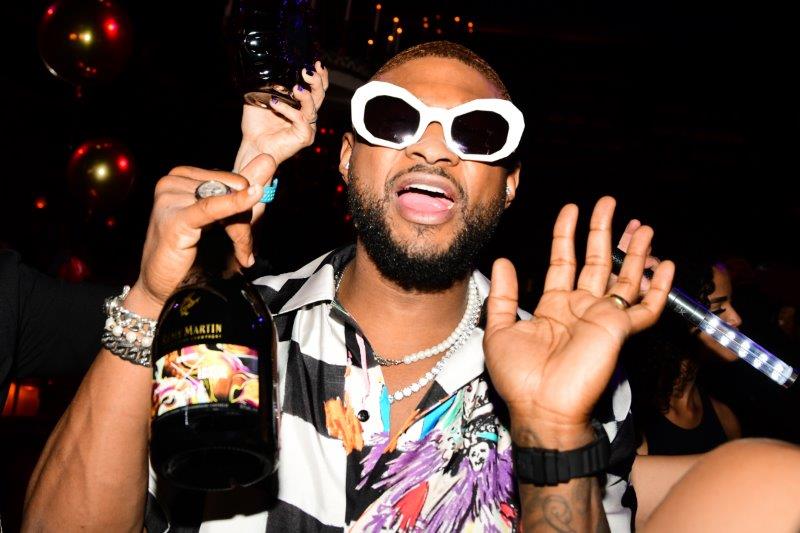 Usher celebrated his 44th birthday with a star-studded party in Las Vegas organized by the singer’s closest friends and family with assistance from renowned French cognac house Rémy Martin. The A-List crowd enjoyed the lively festivities while sipping on signature Rémy Martin cocktails like The Rémy Sidecar, the Ur Way, and the OMG Old Fashioned—Usher-themed variations on classic Rémy Martin drinks—hosted at the NoMad Library at Park MGM Grand Las Vegas on the evening of Thursday, October 13. Usher’s 44th birthday was celebrated with friends from all around the world during the entertaining evening, including Kendrick Sampson, Victoria Triay, Joe Fournier, and others. Even Jermaine Dupri, a close friend of Usher’s, got up on stage to spin some of the singer’s favorite tunes. With unique Usher craps tables and music playing all night, guests were treated to a vintage Las Vegas casino atmosphere.

The celebrations didn’t end there; the following day, on Usher’s actual birthday (October 14), Rémy Martin surprised him once more with a personalized travel trunk and a pair of one-of-a-kind bedazzled roller skates, one of the iconic musician’s favorite pastimes that can be seen as he glides across the stage during his live performances. Once more, friends and family gathered to celebrate Usher’s birthday before his My Way Las Vegas residency, where he performed for the audience. Usher was shocked to discover Rémy Martin’s gift handed to him together with his favorite cake and a decked-out room full of birthday decor as soon as he entered the Dolby Live at Park MGM Grand Las Vegas.

Usher is being honored by Rémy Martin, who has been working with him since his 2010 “OMG” world tour. The “Team Up For Excellence – The Film” highlights the historical relationship between Cognac and American music in France since 1917, and Rémy Martin’s collaborative campaign to celebrate the harmonious blending of two cultures of timelessly excellent music and cognac was first announced in 2021. The two most recently collaborated to launch the “Usher x Rémy Martin 1738: A Taste of Passion” campaign and collection, which included a limited-edition bottle and NFT, whose design was influenced by A.I. integrated technology. The “Usher x 1738 A.I. Powered” Rémy Martin 1738 Accord Royal bottle advertises a modern bottle design. The “Usher x 1738 A.I. Powered” Rémy Martin 1738 Accord Royal bottle boasts a cutting-edge bottle design and the introduction of “A Taste of Passion Experience,” a multi-sensory, immersive experience that goes along with Usher’s My Way Las Vegas Residency.

You can see images from the celebration below.