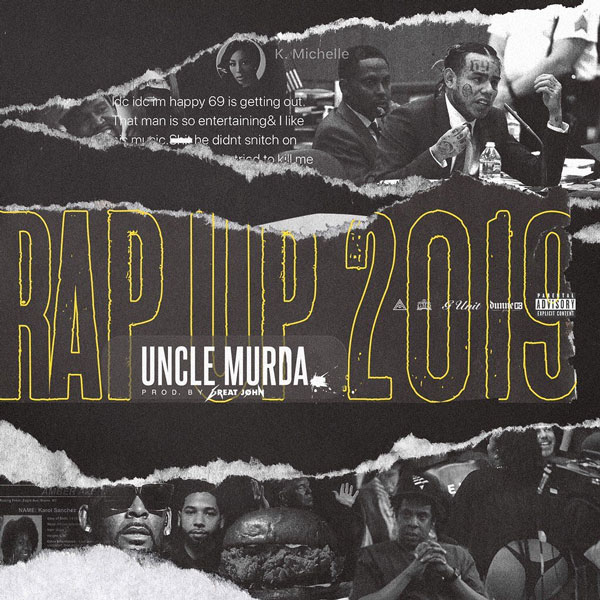 Uncle Murda caps off 2019 with his annual “Rap Up,” where he reflects on the past year—and no one’s safe. On the 10-minute track, he takes aim at some prominent names starting with K. Michelle, who recently tweeted her support for 6ix9ine.

“K. Michelle can’t keep her man, ’cause her pussy stink,” he raps. “Why you back talkin’ about that girl pussy stinkin’? / ‘Cause she put up a post co-signing Tekashi snitchin’.”

He then sets his sights on 6ix9ine, who snitched on his former gang members. “Tekashi really told on all of his homies / His baby mom’s is fuckin’ one of his homies,” he raps. “Wish Nipsey was alive and they killed 6ix9ine / Nip was like Malcolm X and Tupac combined.”

He goes on to call out Tank (“If he sucked a ni**a dick before then that ni**a gay”), R. Kelly (“I hope you with the homos getting raped and peed on”), and Drake (“Drake got booed off stage by a gay crowd … It was them Tyler, the Creator fans”) before putting Kanye West on blast. “Kanye promoting God ’cause his new album comin’ out,” he raps. “But really he in for a bank roll / He ain’t even write that ‘Jesus Walks’ record, ask J. Cole (Rhymefest did).”

The shots continue with Jussie Smollett (“Had the nerve to be on stage saying you the gay Tupac”) and Lil Nas X (“That country ni**a Nas X came out the closet / I wasn’t surprised though, that ni**a look feminine”). Lil Reese, who was hospitalized last month after being shot, also gets caught in his crosshairs. “Lil Reese got shot in the neck, I’m happy he OK / He lost his voice, we ain’t wanna hear his new shit anyway,” he raps.