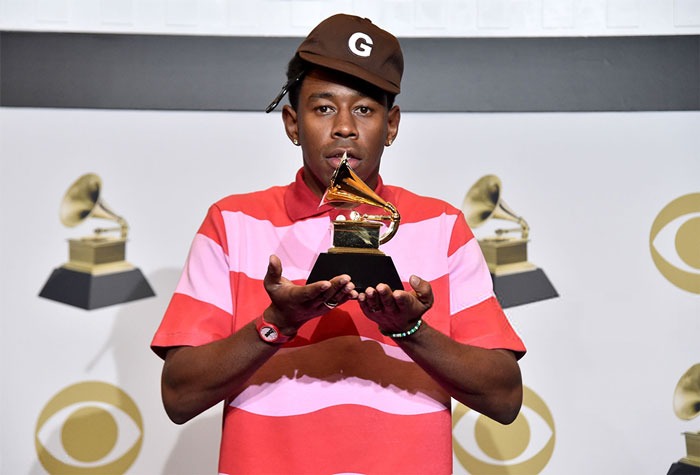 The rapper took home his first-ever Grammy for Best Rap Album for IGOR at the 62nd annual Grammy Awards at L.A.’s Staples Center on Sunday. Tyler was all smiles as he hugged his mother before making his way to the stage to accept.

“You did a great job raising this guy,” he said as his mom stood alongside him with tears in her eyes.

“To my friends and my family for trusting my ideas and putting up with my annoying hyperactive energy since we were children but always being there,” said Tyler as Lizzo, Cardi B, and LL Cool J looked on.

He also thanked his friend Jasper (“This is my day one and I love this dude”) and acknowledged feeling like an outcast in the music industry. “I never fully felt accepted in rap and stuff so for y’all to always stand by me and get me here, I really appreciate that,” he said.

He also thanked Pharrell Williams for being an inspiration. “Growing up feeling left of center to a lot of stuff that I saw on TV, that man has allowed me to be comfortable with myself and has opened up doors that you guys cannot imagine before I met him and when I met him. So thank you P.”

Tyler was nominated in the category against Dreamville’s Revenge of the Dreamers III, Meek Mill’s Championships, 21 Savage’s i am > i was, and YBN Cordae’s The Lost Boy.

While speaking with reporters backstage, he revealed how he feels about being put in the rap category. “Half of me feels like the rap nomination was a backhanded compliment,” he said. “Another half of me is very grateful that the art that I made could be acknowledged on a level like this.”

My Boyfriend Just Won A Grammy