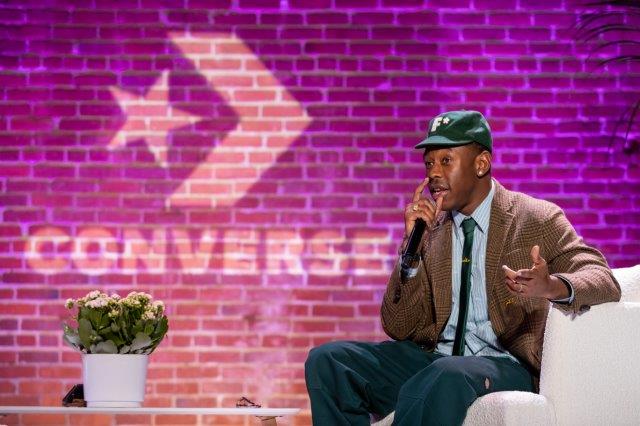 Following the announcement of his new sneaker with Converse, the Golf Wang Chuck 70 Python, Tyler, the Creator, teamed with the brand to host “Converse All Star Series: A Talk with Tyler, The Creator.”

An intimate conversation with Tyler was held at the event, which was attended by 19 young creatives from Los Angeles who are all members of the Converse All Stars community, a global network that connects young creatives to each other and the brand through digital and physical experiences, commissioned work, and mentorship opportunities.

Tyler gave advice for budding creatives, his experience working with Converse, his creative process and motivation, and more during the chat moderated by Bimma Williams.

“I had this idea to make a shoe,” Tyler said on how he connected with Converse. “We were going to do it on our own. That s— is really hard. Like really hard to get it right. A friend of mine by the name of Pharrel Williams, was like ‘Yo! Lil bro, how’s the shoe thing going?’ and I’m like ‘We’re figuring it out, we just got a few samples, they’re horrible. This is going to be a long winded process.’ He’s like ‘hold on, I’m going to put you in contact with someone names Paul that works at Converse. You don’t have to do anything with him but he might have some insight for you.’”

He added, “Long story short, well, small world. That guy knew Clancey, my manager, for years. So that was an easy thing, met up with him blah blah blah. Ended up meeting with Tim and Lindsey and was like okay let’s just do something together because they had the resources and I’m like I’m here to learn.

You can hear the entire conversation and see images from the event below.