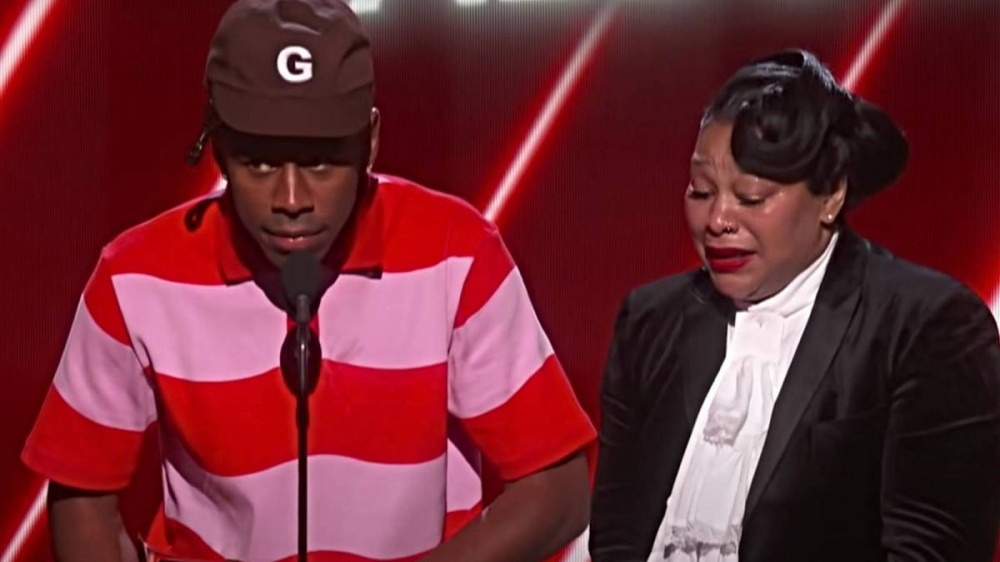 Los Angeles, CA – Tyler, The Creator hasn’t released an album since 2019’s IGOR, but it looks like that could possibly change in the near future. On Wednesday (June 10), a fan noticed a billboard on Sunset Boulevard in Los Angeles that included a random phone number, the words, “CALL ME IF YOU GET LOST” and Columbia Records logo in the lower right corner.

Once connected, a recording of the Odd Future alum having an interesting conversation with his mother begins to play.

“His Daddy fine. I’m fine,” she says. “Shit, his daddy’s fine. What you mean? He got his looks from me. This my n-gga though. My ride or die. I’d kill a muthafucka over this one right here, n-gga. I’d stand in front of a bullet on god over this one. My son used to record me beating bitch’s ass. Facts. I didn’t give a fuck. I boxed up on teachers, principals, mamas, kids. I didn’t give a fuck. Am I lying?”

Tyler responds in his deep speaking voice, “You have no reason to.”

This appeared in Sunset Boulevard and if you call the number you can hear Tyler the Creator and his mom talking in the car, and this billboard has a Columbia Records tag, new album OTW??? #tylerthecreator pic.twitter.com/ivfDsytL4z

A website with the same number has also been set up online, but it doesn’t provide any further details. If anything, the recording proves just how much a mother loves his son. Last year, Tylre, The Creator’s tearful mother joined him onstage as he received a Grammy Award in the Best Rap Album category for IGOR, his first gilded trophy.

“That’s my mom if y’all wondering,” he said upon receiving the honor. “Hello. I don’t know if I’m gonna be up here again so bare with me. Damn, I don’t got nothing prepared. One, to my mother, you did a great job raising this guy.”

He also thanked Pharrell Williams who he said gave him the courage to be himself as his mother stood there and continued to cry tears of joy.

Tyler, The Creator later rubbed his Grammy in the face of one of his haters — nine years after they told him he’d never win an award.

“I FAVORITED THIS 9 YEARS AGO JUST FOR THE MOMENT TO TELL YOU I GOT ONE,” Tyler tweeted shortly after the win. “YES IM PETTY AS FUCK, GOOD DAY MARK.”

I FAVORITED THIS 9 YEARS AGO JUST FOR THE MOMENT TO TELL YOU I GOT ONE. YES IM PETTY AS FUCK, GOOD DAY MARK. https://t.co/WfU85JeHEj