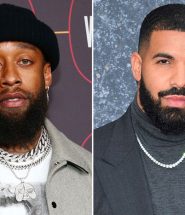 Ty Dolla $ign and Drake may have new music in the works.

In an interview with Power 106, the “Ego Death” singer opened up about a potential collaboration on Drake’s upcoming album.

While Ty admitted that he and the 6 God have been in contact, he stopped short of revealing details. “I’ve been sending him new records too for the new album,” he said. “I ain’t gonna say too much, man, but shout out to Drake.”

The two previously collaborated on “After Dark” and “Jaded” for 2018’s Scorpion. “I love Drake. He’s always been the greatest since he came out and I always wanted to work with him,” said Ty, “so on Scorpion, I think I had been hitting him before to do a song and then when he was working on this album, he hit me up. He was like, ‘Yo, I got some joints.'”

Drake is readying his sixth studio album for release this summer and is reportedly “80 percent” done with the project, which may feature a collaboration with Roddy Ricch. Over the weekend, three new Drake tracks leaked including “Lie to Me,” “Greece,” and “In the Cut” featuring Roddy.

“My new album is done and it’s coming very soon,” Ty said of the follow-up to 2017’s Beach House 3. “Shout to my fans for being patient while I made sure it was perfect, it’s worth the wait…it’s my best work yet.”