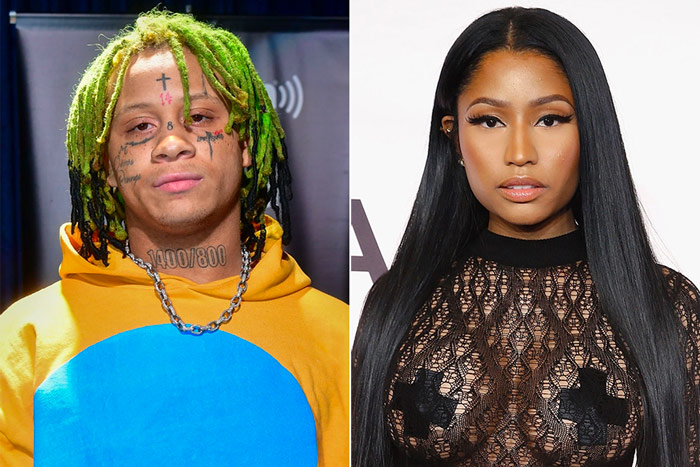 Trippie Redd is feeling some type of way about Nicki Minaj.

During a recent Instagram Live appearance, the “Tell Me U Luv Me” rapper took shots at the rap queen. “Damn bruh, Nicki Minaj really fell off,” he said in the clip.

It’s unclear what triggered the comment, but it could have something to do with 6ix9ine, who Nicki collaborated with on “Trollz.” Trippie and Tekashi have had beef in the past. 6ix9ine recently called him out for never having a No. 1 hit.

“We’re signed to the same label, never went No. 1,” he said of his 10K Projects labelmate, while sporting a Trippie Redd tee.

Nicki’s fans were quick to put Trippie in his place, citing her record-breaking stats including her most recent hits, “Say So” and “Trollz,” which both hit No. 1 on the Billboard Hot 100 in the past couple months. She also surpassed Elvis Presley for the fourth-most Hot 100 entries of all time.

“Trippie Redd talking about Nicki Minaj fell off like his career ever started.. who even listen to Trippie?? Him and his non-existent career,” tweeted one Barb, while another added, “stick to soundcloud.”

Trippie Redd talking about Nicki Minaj fell off like his career ever started.. who even listen to Trippie??
Him and his non-existent career pic.twitter.com/pmWN6Xt6pk

Trippie Redd a whole ass clown talking about Nicki Minaj. Boy the only hit songs you got is cus of juice wrld. Stupid Depressed Goofy sounding ass. Don’t come for nicki

she had 2 #1’s back to back in 2020. stick to soundcloud @trippieredd pic.twitter.com/KBuFtXFgsA