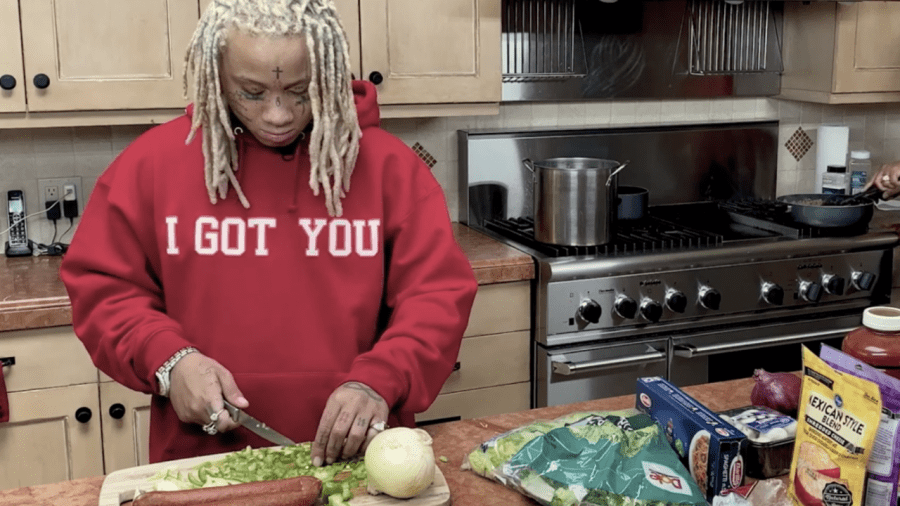 EXCLUSIVE – Trippie Redd is set to appear on a brand new episode of FUSE’s Made From Scratch this week. The cooking series finds various artists cheffing up some of their favorite childhood dishes with various family members. Here, Trippie gets in the kitchen with his mother to cook some spaghetti.

On Monday (November 16), HipHopDX obtained an exclusive clip featuring Trippie speaking on how Lil Wayne, his mother and late brother, who died in a car accident in 2014, inspired him to start making music.

“My brother, he made music and I thought that was amazing,” he explained. “I was like, I’m going to just follow in his footsteps and do the same exact thing. That’s all I wanted to do, and it’s amazing to see where I am now.”

The Ohio native fell in love with Weezy’s rockstar appearance, all while he was dominating the rap world.

“I loved Lil Wayne,” Trippie admitted. “Just his personality, he’s his self and he ain’t never going to change for nobody. I like that about him and how his image is so rock star-ish. He just got this image that is so rock world and then he actually did a rock album. I was like, ‘Oh yeah, this is definitely my favorite artist.'”

Following the release of the Pegasus album, which had a portion leak earlier this year, Trippie compared himself to being like the “real life Lil Wayne” since the Young Money leader’s Tha Carter V project partially leaked in 2016 and 2017.

“Hey man, I’m the real life Lil Wayne now, you know what I’m saying?” he says in the video posted to Instagram. “I dropped a leaked album. My shit like Carter V, boy. The fuck you talkin’ bout?”

Pegasus was released on October 30 and debuted at No. 2 on the Billboard 200 behind Ariana Grande’s Positions with roughly 60,000 total album equivalent units earned.

Tune into Made From Scratch on FUSE on Tuesday night (November 17) at 11 p.m. EST/PST. Previous Season 2 episodes include appearances by Miguel, MadeinTYO and more.