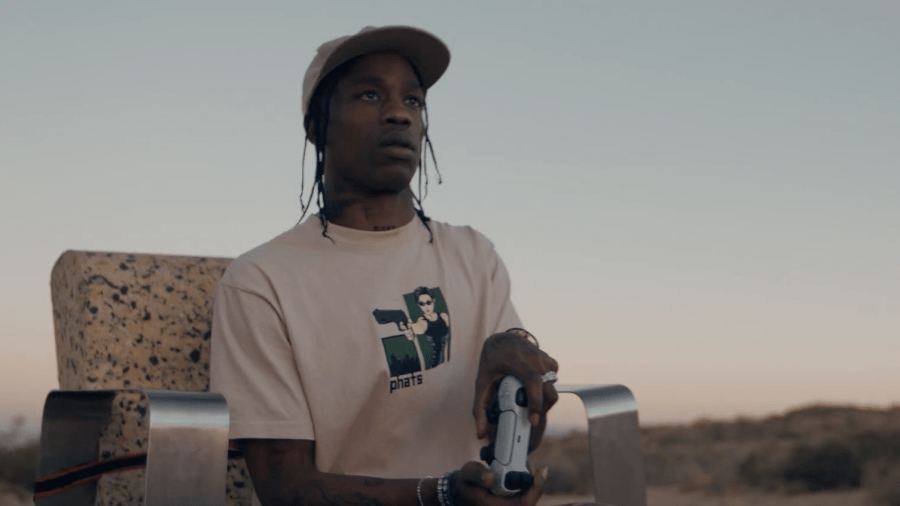 Travis Scott is continuing his creative partnership with PlayStation by giving back to fans following the release of the PlayStation 5 on Thursday (November 12).

In a video titled “A Travis Scott + Cactus Jack Experience – PS5: Unboxing Reimagined,” the Houston-bred rapper is shown gaming in the middle of a desert, before surprising a couple of 16-year-old fans from South Central, Los Angeles. Scott gifts them with a PS5 console each and ends up playing games with them in the back of a specially designed Cactus Jack/PlayStation truck.

“He just popped out, like I was having mixed emotions,” one of the kids said. “I don’t know, I just couldn’t think at the moment. We look up to him as a person, as a role model, just because he came from where most of us came from. He makes music for us.”

Scott added, “I’m not gonna lie, it’s kinda crazy. Pull up, to be able to drop them off something special. Man, I wish somebody just showed up to my spot and gave me one of my favorite consoles. To be able to just make somebody smile on a random Friday.”

Elsewhere in the clip, James Blake performs his song “Do You Ever” and Pop Smoke gets a special tribute at the end.

Scott returned to Instagram on Thursday (November 12) for the first time since deactivating his account in October, which was apparently due to “focusing on his family and their well-being” rather than being clowned for his Batman costume for Halloween.

In one of his posts, he provided a closer look at the Nike Dunk Low Cactus Jack x PlayStation sneaker, which features three PS logos across the shoe’s design. Unavailable to purchase, the shoe is extremely limited edition and only available via a raffle on his website.

Travis Scott was announced as a strategic creative partner for Sony’s gaming brand in October, leading up to the PS5’s launch.

“I’m really looking forward to being able to showcase everything that Cactus Jack has worked on with Sony and the PlayStation team,” Scott said in a press statement. “Most importantly I’m excited to see how the PlayStation fans and family respond, and I look forward to running some games with everybody very soon!”

“Travis is an artist who is incredibly innovative, constantly surprising, and continues to push boundaries, very much like the PlayStation brand – so we think this is a perfect fit,” PlayStation added. “When we embarked on this collaboration, the most important thing was to keep it as open as possible, to allow space to explore interesting, creative ideas.”

Scott was one of the first celebrities to receive the PS5, with the rapper having a console in his possession as early as September 25. He was also one of the first to receive a copy of NBA 2K21 on the new console, thanks to 2K Sports marketing director Ronnie 2K delivering it to him in person.

“This is the biggest launch in 2K’s history and always great innovating with PlayStation’s strategic creative partner and my good friend,” Ronnie said. “Had to get him one of the first printed copies in the world. Only up from here on that PS5!”