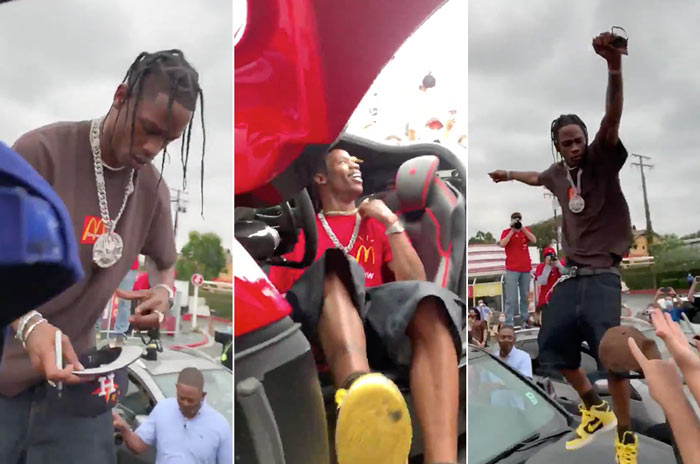 It was anything but low key at McDonald’s when Travis Scott made a surprise appearance.

The Houston rapper celebrated the launch of The Travis Scott Meal by hitting up one of the original Mickey D’s in Downey, Calif. on Tuesday. His Ragers were out in full force to catch a glimpse of La Flame in person.

He pulled up in a black SUV and greeted the giant crowd of fans, who broke past the barricades and swarmed the rapper, asking for autographs and pictures. Some held sneakers and vinyls, while one fan even asked Travis to sign his dog.

#PressPlay: #TravisScott pulled up to the old school #McDonalds in #Downey to celebrate the new collab! 🔥🍔🌵 pic.twitter.com/pzVPSEYwlI

Travis captured all the mayhem on Instagram Live. “It’s a different type of McDonald’s today, boy. We ain’t selling no McMuffins,” he told his livestream viewers.

At one point, Travis asked a McDonald’s employee if he could borrow their red Cactus Jack employee T-shirt. “I’ll give it back to you,” he said before swapping out his own Cactus Jack tee for theirs. He then pulled off in his red LaFerrari.

From Sept. 8 through Oct. 4, you can order The Travis Scott Meal which includes Travis’ favorite items including a Quarter Pounder with cheese, lettuce, and bacon, medium fries with BBQ sauce, and a Sprite. Travis is the first celebrity to get his name on a McDonald’s meal since Michael Jordan and the McJordan burger in 1992.

Watch an animated Travis introduce his go-to McDonald’s order in his official commercial below.