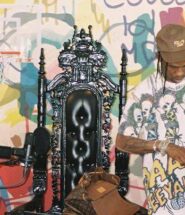 It is good to be Travis Scott these days. Beyond multi-million dollar business deals and copping mansions with straight cash, the Houston rapper is flexing the perks of being a pop star as well.

On his Instagram account Friday (September 25), Scott shared a photo of the Playstation 5’s DualSense Controller, leading many to confirm that he had obtained Sony’s PlayStation 5 months before anyone else. He captioned the post simply, “I will be playing until the sun up.”

I will be playing until the sun up

While there’s no clue what games Sony hooked Scott up with, the post caused plenty of envy for individuals across the globe who have struck out attempting to pre-order the console. Retailers jumped the gun in regards earlier this month in taking preorders a day early, disappointing plenty of gamers who attempted to get their hands on the console to beat the holiday rush.

Sony apologized on September 19 and said more preorders would be made available soon.

Scott having the PS5 early only adds to Lil Yachty’s decree the Houston rapper is having the best 2020 out of anyone.

“I ain’t gone lie, I think Travis Scott might be the only one who had a good 2020,” Yachty tweeted on Friday (September 25). “I’m not even talking about music.”

I ain’t gone lie, I think Travis Scott might be the only one who had a good 2020

Scott’s year has been complimented by one extravagant collaboration after the next. He partnered with McDonald’s to release his own signature meal, complete with merchandise and more. La Flame also jumped ahead of many in terms of virtual concerts by teaming up with Fornite to deliver his “Astronomical” set, which set streaming records in the process.

Music-wise, Scott isn’t slowing down. On Thursday (September 24), he released “FRANCHISE,” a brand new single with Young Thug and M.I.A. where he decided to take over Michael Jordan’s old mansion in Chicago. Watch the official visual below.