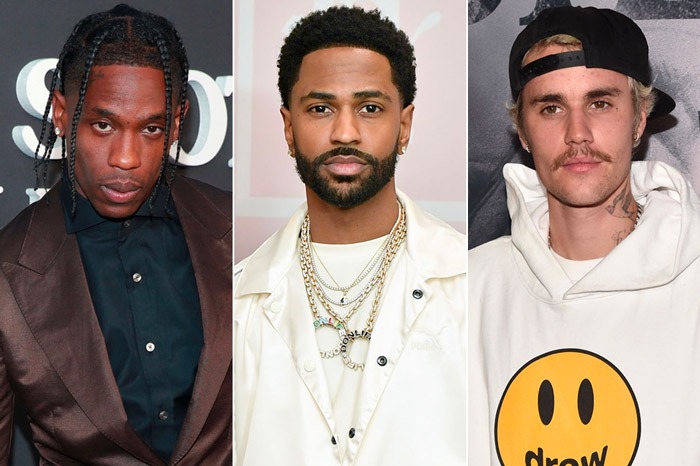 Travis Scott, Big Sean, and Justin Bieber have some heat on the way.

The all-star trio hit the studio this week to cook up a new collaboration. On Monday night, Hit-Boy shared footage of the superstars working together in the lab. In the first Boomerang, the super-producer tagged Travis while the second clip featured Bieber and Sean. It was captioned: “2nd wave.”

It’s unclear what they’re working on, but fans are already excited for the potential track. “my wig has been snatched already,” wrote one Twitter user.

my wig has been snatched already
pic.twitter.com/tnWNKPvB6p

This wouldn’t be their first time collaborating. Travis and Bieber’s previous tracks include “Maria I’m Drunk” and “Second Emotion” off Bieber’s latest album Changes, while Sean and Bieber have collaborated several times on songs such as “As Long As You Love Me” and “No Pressure.” In 2017, Travis and Sean teamed up on the Metro Boomin-produced “We Go Legend.”

Sean is nearing completion on his long-awaited album Detroit 2, the follow-up to 2017’s I Decided. “It’s pretty much done though. I’m just putting final touches on it,” he told Khaled last month.

Hit-Boy recently received his second Grammy for Best Rap Performance for “Racks in the Middle,” which he produced for Nipsey Hussle and Roddy Ricch. He shared a video unboxing the award alongside Big Sean before pouring champagne and drinking from it. The video was soundtracked by an unreleased collaboration he produced for Sean and Nipsey off Detroit 2.

My second Grammy just came in the mail. Me and @NipseyHussle got sumn new dropping this summer wit @BigSean on #Detroit2 tell bro to drop it pic.twitter.com/Fa9aXtpgQL