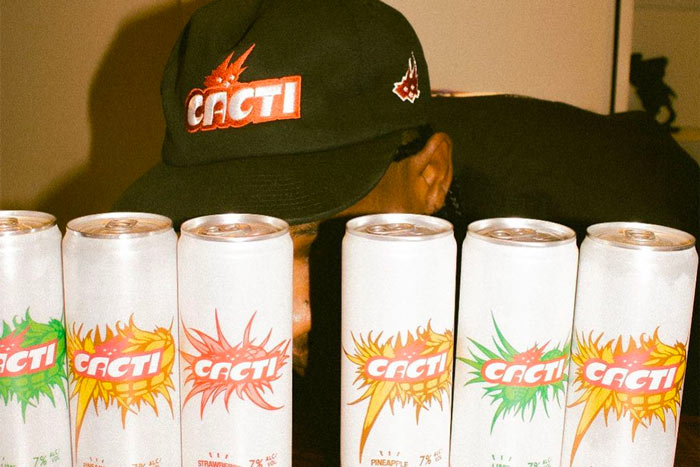 Travis Scott is expanding his franchise.

The Houston rapper has officially announced his CACTI Agave Spiked Seltzer in partnership with Anheuser-Busch. Launching in March 2021, CACTI will have a 7% ABV and will be available in flavors including lime, pineapple, and strawberry.

The hard seltzer first appeared in the video for “Franchise” where Scott famously rapped, “CACTI’s not no iced tea.”

Travis, who serves as the brand’s founder and creator, and his Cactus Jack creative collection worked side by side with Anheuser-Busch’s innovation team to create the flavors, packaging, and ingredients.

“CACTI is something I’m really proud of and have put a ton of work into. Me and the team really went in, not only on getting the flavor right, but on thousands of creative protos on everything from the actual beverage, to the can concept, to the packaging and how it is presented to the world. We always try to convey a feeling in our products,” said Travis. “I’m a big fan of tequila so I came at it from that angle, too. I’m really excited to put this out in 2021 and see other people be able to enjoy it.”

Fabricio Zonzini, President of Beyond Beer at Anheuser-Busch, added, “We are all about delivering what consumers want, and as a culture-shaping artist, Scott is incredibly connected to his fans and what’s new and next in culture. As we continue in our mission to lead industry innovation and optimize our portfolio for the future, I’m excited that we can play a role in bringing to life Scott’s vision to deliver something new to the hard seltzer space.”

Brewed in Los Angeles and made with 100% premium blue agave from Mexico, the “bold beverage” will be available in 12oz cans sold in a 9 count variety pack as well as 16oz and 25oz singles sold in lime and pineapple.

This is the latest venture for Travis, who earned a reported $100 million this year thanks to deals with PlayStation, Fortnite, General Mills, and McDonald’s.