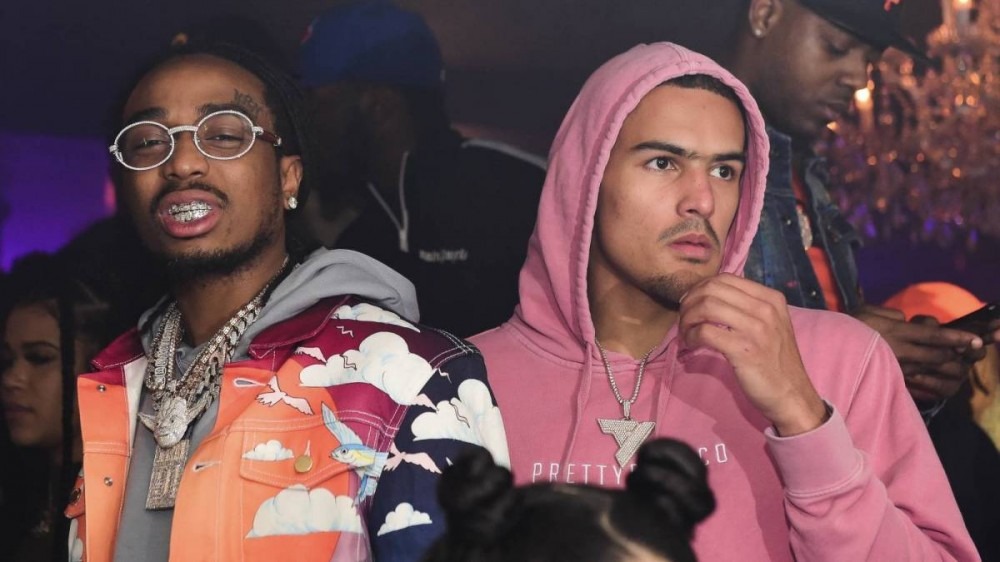 Quavo has a very strong friendship with Atlanta Hawks All-Star point guard Trae Young. The support from the Migos frontman extends to him actually going to home and away games to support the young player. But it looks like the support goes all the way back to Young’s rookie season.

During a recent appearance on GQ Sports’ 10 Things Trae Young Can’t Live Without, the frizzy-haired player explained the diamond-encrusted “Ice Trae” chain that Quavo gave him as a gift his rookie season is one of his most prized possessions.

“I want to show y’all probably my favorite chain. Quay got it for me my rookie year. It was like my welcome to Atlanta gift he gave me. There’s a lot of diamonds in here, I ain’t never really asked Quay what the details were. I don’t wanna get all into detail, but I was just appreciative of it,” he said.

Young also explained Quavo was the catalyst in everyone calling him “Ice Trae” around the league. “Ice Trae” started as a small trend at the State Farm Arena where the Hawks played and soon blew up into a nationwide thing where everyone called him that.

“First, I was wearing it for like, for a minute, especially around the house,” Young continued. “I had never gotten a chain. I mean, I’m from Oklahoma. So coming down to Atlanta, getting this. Quay definitely opened my eyes to more jewelry. I don’t bring it out too much though. I don’t bring out too much, only certain times.”

With Quavo being his good friend, one may wonder if Trae Young thinks his boy is one of the best rappers out now. In September, Young made a hasty claim after hearing Certified Lover Boy for the first time, saying that it’s finally time to accept Drake surpassing JAY-Z as the greatest of all time.

Hip Hop fans took to social media with their opinions, but Trae Young was ultimately dragged and had no choice but to apologize. The 23-year-old tweeted that Hov is his number one rapper, but the damage had already been done.