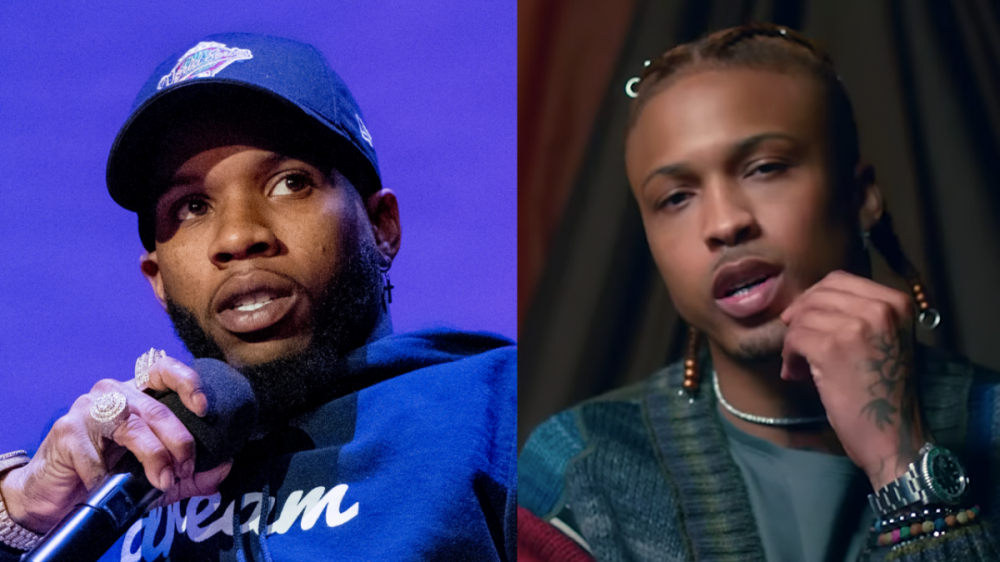 Tory Lanez has responded to August Alsina’s allegations he assaulted him after a concert on Saturday night (September 17).

The Daystar rapper spoke with Akademiks on the phone during a live stream on Sunday (September 18), shortly after Alsina publicly accused him of sucker punching him, with photos of his injuries to boot.

When the Off the Record podcast questioned Tory about the alleged altercation, he denied any involvement or knowledge, saying: “Nothing happened. I don’t even know what this kid is talking about, brother.”

Akademiks followed up with: “So you not involved?” Tory answered: “No, hell no! I don’t know if he’s doing [this for] promo. I don’t know what that n-gga is talking about, bruh.”

Tory seemingly doubled down on his denial on his Instagram Stories, claiming he had been locked in the studio and focused on self-improvement.

“I don’t know what everybody talking about …. But I’ve been in the studio I’m not in anything negative … Ive been working on my self …. And being a better person,” he wrote, punctuating his claim of innocence with several smiling face with halo emojis.

August Alsina accused Tory Lanez of attacking him in an Instagram post shared on Sunday, in which he detailed the alleged altercation while sharing a photo of him slumped against an elevator wall with blood running from his mouth.

The R&B crooner claimed Tory — who he referred to as a “4’11 sized leprechaun” — and his security team confronted him after his show in Chicago, with the rapper upset at Alsina refusing to shake his hand over past comments about his “entanglement” with Jada Pinkett Smith.

Tory allegedly then took a hit from “a blunt laced with cocaine” and punched him in the face when he wasn’t looking, before hiding behind one his security guards.

“There was never a ‘fight’! Simply an Assault,” he wrote in part. “Dude has no real friends, and is on a crash out mission.”

Alsina also claimed Tory’s crew captured the whole incident on camera and demanded they release the footage, which he believes will debunk the “falsities” the rapper has allegedly been feeding to blogs.

Additional photos shared on Instagram by Alsina give close-ups of a gash on his lip, as well as cuts and grazes on his elbow and knee.

“Me after a toupee’d sneak attack then being man handled by buku security one deep, as the jealous leprechaun run’s back off into the building,” he captioned the images. “[crying face emoji] @encinawellness is the key to healing this. I b back with my results once I heal up.”

The comments at the heart of the alleged altercation stem from an unreleased song Tory Lanez previewed on Instagram in July 2020, in which he referenced Alsina’s highly publicized relationship with Will Smith’s wife, Jada Pinkett.

“Let me start fucking on Jada, I ain’t gon’ snitch like August,” he rapped over Lil Baby and 42 Dugg’s “We Paid” beat.

August Alsina isn’t the only famous musician to have accused Tory Lanez of assault. Megan Thee Stallion is currently entangled in a bitter legal battle with the Brampton native over allegations he shot her in the feet while yelling “Dance, bitch!” outside a party in the Hollywood Hills in July 2020.

The trial — in which Tory is charged with felony assault and carrying an unregistered firearm — was due to begin on September 14, but has been delayed until at least November 28. If convicted, Tory faces up to 22 years and eight months in prison.