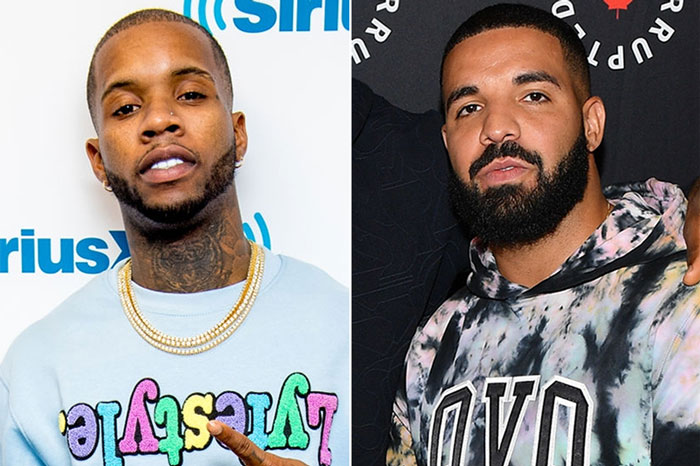 Tory Lanez returned to the airwaves with another episode of his popular “Quarantine Radio” series, and this time he welcomed his biggest guest yet—Drake.

Drizzy, whose new single “Toosie Slide” drops Thursday night, popped up during Tuesday’s episode while sipping from a large wine glass. “We know you were around Kevin Durant when he caught the corona. What were you doing to stay corona free at that time?” Tory asked his fellow Canadian.

“Honestly, a glass of wine keeps corona away, boys,” joked Drake, who tested negative for the virus.

Drake explained that it was Chris Brown who alerted him to join Tory’s live, which Tory called a “lightskin to lightskin moment.”

At one point, 315,000 viewers were tuned into the livestream, which Tory claims was a new record. They celebrated by taking a shot. “Before we take this shot, we have to shout out the fact that we’re the only two people in the game that have ever hit 300,000,” he said.

He also welcomed Young Thug during Tuesday’s episode. When asked what he’s doing during quarantine, Thugger replied, “Having .”

Tory is set to release his new album New Toronto 3 on April 10 featuring the single “Do the Most,” for which he released a video this week.

tory lanez: young thug what are you doing to avoid coronavirus