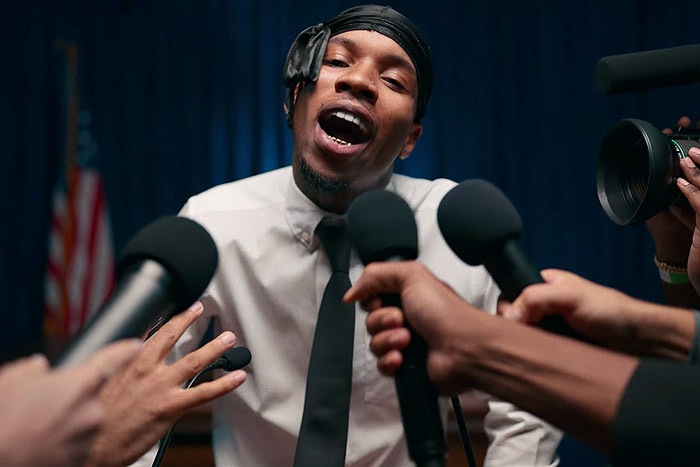 Tory Lanez prevails in the video for “Most High,” the first visual from his surprise project DAYSTAR.

While he continues to face backlash in the wake of the Megan Thee Stallion shooting, the Canadian rapper confronts his critics while declaring his innocence.

The celebratory clip opens with Tory in court after being acquitted before tossing his glove in a nod to O.J. Simpson. “I walk away free ’cause I’m innocent / And when I walk, the whole world know a ni**a walked,” he raps.

He then faces off with the devil in a boxing ring and channels Slick Rick. “Never did I think I would ever see the day / Rap ni**as tellin’ the cops to come for me,” adds Tory.

He hits the beach (“All I see is Free Tory, Free Tory / Homie, I was in Miami on the shore chillin'”) and suggests that it’s all part of a conspiracy to take him down (“Soon as I get my masters back they want chatter”).

“Most High” is one of 17 tracks on Tory’s album DAYSTAR, on which he denies shooting Megan Thee Stallion. He also addressed his fans in a message on Instagram last night, which has since been deleted.

“I don’t move on social media’s time. I move on Gods time. I don’t operate in fear I operate in FAITH,” he wrote. “I don’t bow down to the lies of man . I stick with the TRUTH of god . And for those reasons . It doesn’t matter who rises against me in this hour and small season . BIG OR SMALL OBSTACLE …. I will PREVAIL and RISE to GREATNESS . As GOD SAID I WILL.”