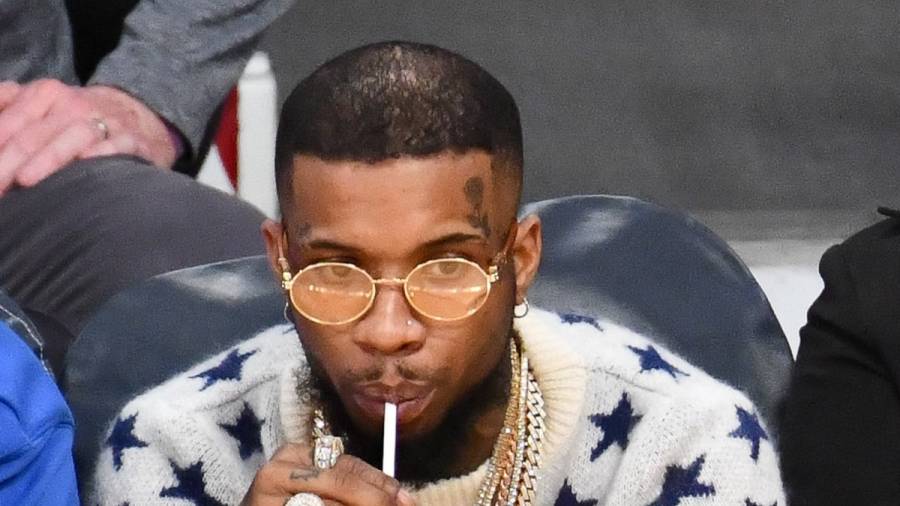 Los Angeles, CA – Tory Lanez was reportedly in a Los Angeles courtroom on Monday (August 23) for violating the restraining order put in place for Megan Thee Stallion. As reported by TMZ, a judge increased his bail from $190,000 to $250,000, meaning he’ll have to pay an additional $60,000 to stay out of jail while his criminal case is pending.

The prosecutors in the case allege Lanez violated the terms of the restraining order when he appeared at Rolling Loud Miami on July 26, moments after Megan left the stage. Consequently, the judge modified Lanez’s bail conditions to specifically prohibit him from attending events where Megan will be. The judge also said if it happens again, he’ll be thrown back in jail.

Prosecutors filed the motion earlier this month to hold the embattled rapper in contempt of court for violating the restraining order that was issued last October. Paparazzi caught up with Lanez as he was leaving the courthouse and he refused to answer any questions about the case or Rolling Loud. Instead, he cracked a joke about “getting [his] good side.”

Lanez was charged with felony assault for allegedly shooting Megan Thee Stallion in July 2020, something he’s repeatedly denied. He even went as far to drop an entire album called DAYSTAR last September that was solely dedicated to clearing his name.

As he rapped on the song “Money Over Fallouts:” “Girl you had the nerve to write that statement on that affidavit, knowing I don’t do it/But I’m coming at my truest, tryin’ to keep this shit 200 with ya, shorty.

“I can’t prove it but them people in yo’ ear/They the true ones that I feel that really got you thinking Tory Lanez would do you in for real.”

He added, “Don’t forget you was my bitch, I held it down and kept it real/I would never paint no fake picture of you just for some mills/And I thought that you were solid too, but look at how you doing me/Look at you doing me, people tryin’ to ruin me.”

But Megan Thee Stallion and her attorneys beg to differ. In January, Lanez’s team filed a motion requesting permission for the rapper to speak on the case, noting there was “gunshot residue implicating others.” But attorney Alex Spiro told Page Six Lanez and his team could be leaving out two crucial details.

“Did the motion fail to mention that there was gunshot residue on his hands or that he texted her ‘Sorry?’” he said at the time. “I haven’t had a chance to read it.”

Megan revealed she’d been shot on July 13, 2020 after a night out with former Keeping Up With The Kardashians star Kylie Jenner and Lanez, who was arrested that night for felony possession of a concealed weapon. Megan, on the other hand, was taken to a local hospital where she was treated for bullet wounds in her feet.