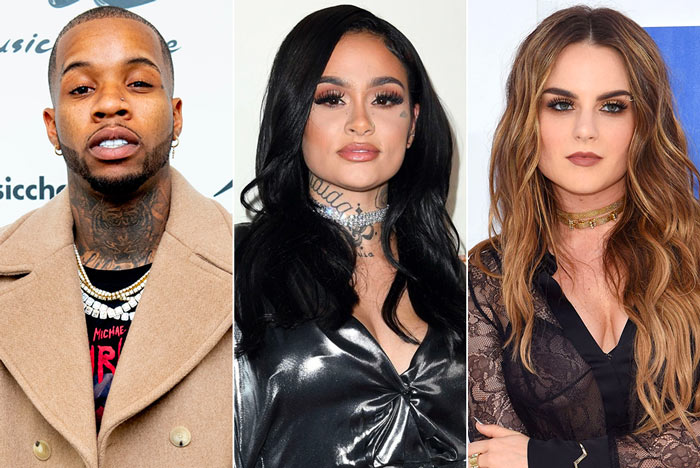 He shares his account of what happened between him and Megan on the 17-track set, while also addressing friends he feels betrayed him by siding with the Houston rapper. On “Bittersweet,” Tory calls out Kehlani and JoJo, who both removed him from their albums following the controversy.

“And these R&B singer women you called, all your friends choose / Kehlani hops on the news like it was somethin’ to prove / Like me and her wasn’t cool when I been friends with you for six years,” he raps.

He blasts the “Nights Like This” singer for not speaking with him before severing ties, despite their long friendship. “Got my phone number too, you coulda called me / But you movin’ like we ain’t even crew, and you’d not rather hear my views? / We used to phone talk late about exes and all our boos / I held your newborn in my arms, tell me how we aren’t cool / Instead, you went to Twitter Shade Room to focus on your views.”

Kehlani, who collaborated with Tory on “Can I,” announced plans to remove Tory from the upcoming deluxe edition of her album It Was Good Until It Wasn’t following Megan’s accusations.

full transparency cuz i believe in that with my following,
his verse is still on the song, the video is solo. new verse on the deluxe.
💯

According to Tory, Kehlani made the first move and inspired others to follow suit. “You was the quickest one to take me off records and set the mood / And now you got these little garbage artists talkin’ like they takin’ me off somethin’ that’s gon’ harm me / Your label paid me already, dude.”

He also turns his attention to JoJo, who removed him from their collaboration “Comeback” off the deluxe version of her album good to know. “Ayy, JoJo, I need you to take notes too / Don’t take me off the deluxe album that no one gives a fuck about / Take me off the original too.”

Def took him TF off https://t.co/g71jTOytXB

Tory notes that both collaborations are among the most-streamed songs for both artists on Spotify. “‘Cause when I’m scrollin’ through this Spotify playlist / See me my name both in y’all top five pages / It just feels a little unsincere, hmm? / Y’all could have took me off the album but have still have yet to do? / Ayy, nah, maybe it’s the truth / Got the numbers and the proof / ‘Cause with both of y’all combined, I gave y’all 40 million views / Y’all can’t lose.”

Tory told Keblani & JoJo y’all can take me off the deluxe but I’m still in y’all top 5 pic.twitter.com/VrdZBtqoLA

He also mentions Kehlani on the album opener “Money Over Fallouts.” “Hurt my heart to see them Twitter fingers come from Kehlanis and Kaash Paige,” he raps, while claiming that he lost “$10 million dollars because this cold business.”