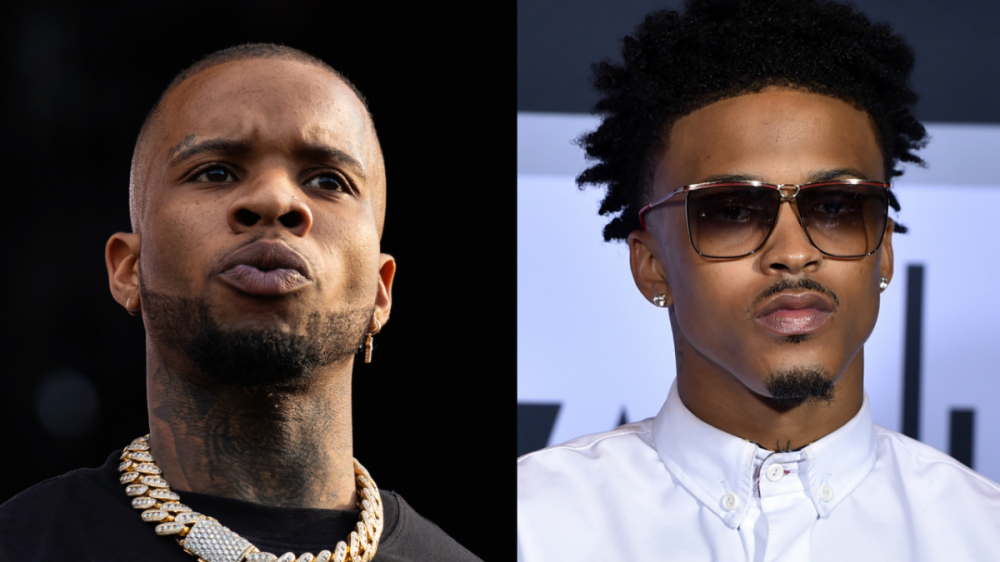 Footage of Tory Lanez and August Alsina’s tense exchange has surfaced, corroborating reports on what led to Tory’s alleged assault on Alsina.

Tory can be seen extending his hand as Alsina walks past him. However, the R&B singer looks at Tory’s outstretched hand, ignores it and continues walking down the corridor, leaving Tory frozen in disbelief.

The Chixtape rapper, accompanied by numerous burly security guards, later makes his way down the corridor in Alsina’s direction. One female onlooker says: “Nooo!” While another warns: “Don’t do it. You already shot Megan,” referencing his alleged shooting of Megan Thee Stallion.

The clip then cuts to what appears to be the aftermath of the alleged attack, showing Tory Lanez smiling, shuffling and high-fiving a passer-by while walking back down the corridor with his security team.

“You knocked his ass out, Tory?” a voice says off-camera. “Tory say he just knocked August Alsina ass right out. One punch crushed him.”

Audio of a conversation between Tory Lanez and August Alsina prior to the alleged punch also surfaced on Monday. The clip finds Alsina confronting Tory about past comments he made about his relationship with Will Smith’s wife, Jada Pinkett.

“What up? I hate when n-ggas don’t keep the same energy with me,” an angry Alsina asks, to which Tory replies: “What energy?”

Alsina continues: “Why did you speak on my business online?” Tory answers: “Hold on, hold on” before the audio cuts off.

August Alsina claimed the “sneak attack” left him with numerous injuries, which he documented on Instagram over the weekend. One photo shows a gash on his lip while others show cuts and grazes on his elbow and knee.

According to the Testimony crooner, Tory Lanez and his security pressed him about ignoring the rapper’s hand shake. After a verbal exchange, Tory allegedly then took a hit from “a blunt laced with cocaine” and sucker punched him, before hiding behind his security.

Alsina also claimed Tory’s crew captured the whole incident on camera and demanded they release the footage, saying it will debunk “falsities” the rapper has allegedly been feeding to media outlets. He referred to Tory as a “leprechaun” in his Instagram posts.

The Forever Umbrella founder has denied Alsina’s allegations, telling Akademiks in a brief phone interview on Sunday (September 18), “Nothing happened. I don’t even know what this kid is talking about.”

In an Instagram Story posted earlier that day, he claimed he had been busy working in the studio and staying out of trouble.

“I don’t know what everybody talking about …. But I’ve been in the studio I’m not in anything negative … Ive been working on my self …. And being a better person,” he wrote, punctuating his claim of innocence with several smiling face with halo emojis.

The tension between the two artists appears to stem from an unreleased song Tory Lanez previewed on social media in July 2020, in which he referenced August Alsina’s highly-publicized “entanglement” with Jada Pinkett.

“Let me start fucking on Jada, I ain’t gon’ snitch like August,” he rapped on a remix of Lil Baby and 42 Dugg’s “We Paid.”