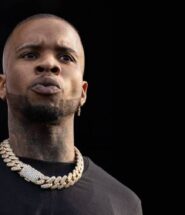 Tory Lanez will be back on Instagram Live for the first time since his altercation with Megan Thee Stallion. Taking to social media, the New Toronto 3 artist revealed he’d return to the platform on Tuesday (October 20) at 8 p.m. EST.

It’s unclear if he plans to bring back Quarantine Radio, as the announcement comes just days after he asked fans if they’d like to see its return. The question was prompted by a comment from a fan asking for Lanez to bring it back.

“Do y’all ACTUALLY want that shit?!” he wrote in response.

The Toronto native found success with his Live sessions at the start of the quarantine and at one point broke Instagram’s then-record with over 237,000 viewers during one single stream. It reportedly also increased his music streams to 20 to 30 million streams a month.

On October 8, Lanez was formally charged with a felony count of assault with a semiautomatic firearm and one count of carrying a loaded, unregistered firearm in a vehicle for the incident with Megan that went down on July 12. However, he continues to maintain his innocence.

“[Time] will [tell]… and the truth will come to the light,” he wrote on Twitter the following day. “I have all faith in God to show that … love to all my fans and people that have stayed true to me & know my heart … a charge is not a conviction. If you have supported me or meg thru this, I genuinely appreciate u.”