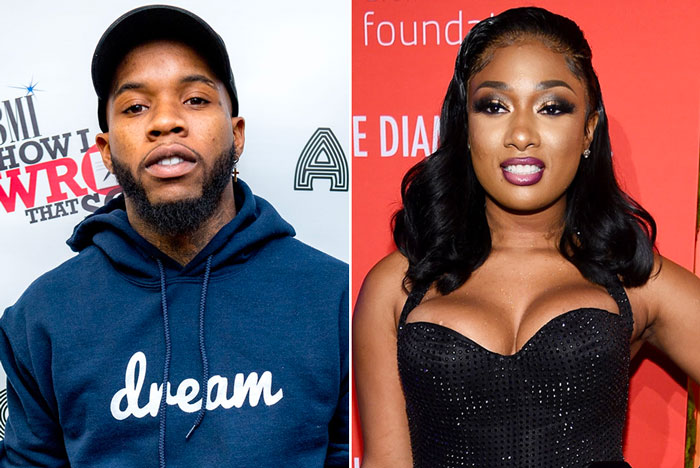 More shocking details are emerging from the shooting that occurred over the weekend involving Tory Lanez and Megan Thee Stallion.

Page Six now reports that Tory was the one who allegedly shot the Houston rapper following a dispute inside his chauffeured vehicle on Sunday morning.

“Tory fired the shots from within the vehicle while Megan was outside trying to leave,” a source told the outlet. “There is video and the police are investigating. This is a case of a man physically harming and abusing a woman.”

The LAPD is currently investigating and would not say whether Lanez is a suspect. “The detectives are seeking information regarding the shooting involving Daystar Peterson, and the investigation is still ongoing. I’m not privilege to what the detectives have right now,” said a spokesperson.

Megan has a visible trail of blood coming from her foot and LAPD had these niggas doing the CHA CHA SLIDE IN THE MIDDLE OF THE STREET BEFORE HELPING HER. Police are useless! pic.twitter.com/1BCXAUW9m9

Police arrested Lanez after pulling over his SUV and charged him with carrying a concealed weapon in a vehicle. The Toronto rapper was released after posting $35,000 bail. He is scheduled to appear in court Oct. 13.

On Wednesday, Megan addressed the incident on Instagram, saying she was hospitalized after suffering multiple gunshot wounds. “On Sunday morning, I suffered gunshot wounds, as a result of a crime that was committed against me and done with the intention to physically harm me,” she wrote. “I’m incredibly grateful to be alive and that I’m expected to make a full recovery, but it was important for me to clarify the details about this traumatic night.”

I was never arrested. This whole experience was an eye opener and a blessing in disguise. I hate that it took this experience for me to learn how to protect my energy.

Megan’s best friend Kelsey Nicole, who was also in the car, has denied that she was the one who shot Megan. “I WASN’T the one with the gun and would never do something like that,” she said. “However I was present.”

Megan’s producer Lil Ju addressed Tory in a since-deleted tweet. “@torylanez count your fu**ing days,” he wrote, adding, “I care about my people being straight! Give a damn about some clout.”

Megan The Stalion’s producer just tweeted this and deleted it… pic.twitter.com/mBg4lcYmSm

I care about my people being straight! Give a damn about some clout